The Estate of Rebecca Proctor

In looking at the families and estates of Ira Proctor, who passed away about 1809, apparently after having just arrived with his family in Perry County, Alabama, all the while leaving property in Anson County, NC, and his son John, who made it to the 1840's, I keep finding more pieces of this incomplete and misconstrued family puzzle.

There are links to other families, that are in multiple ways, tied to each other and to the Proctor's. Several of these families seem to flow like an unhindered river from Virginia to Edgecomb County, North Carolina to Anson County, NC to Perry County, Alabama. Whether by division into smaller counties or just physical relocation, some end up in neighboring counties, but Perry seems to be the gravitational center. 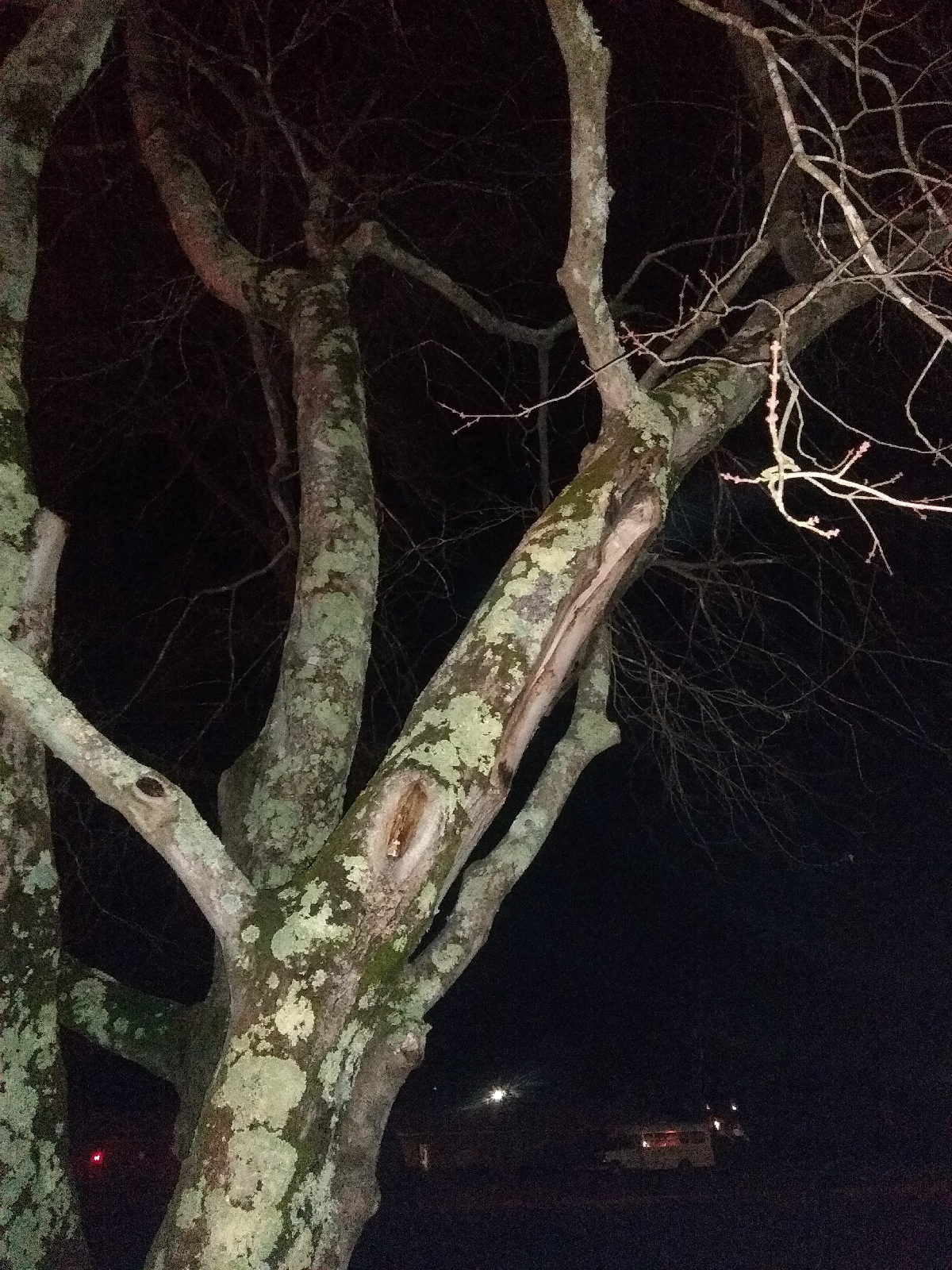 Certain of these families are as intertwined as Morning Glory vines climbing a fence post. Or a bunch of muscadine vines smothering an old maple tree.

We have the Lees, the Holmes, the Hinsons and a touch of Grace. And it all revolves back to the Proctor's. 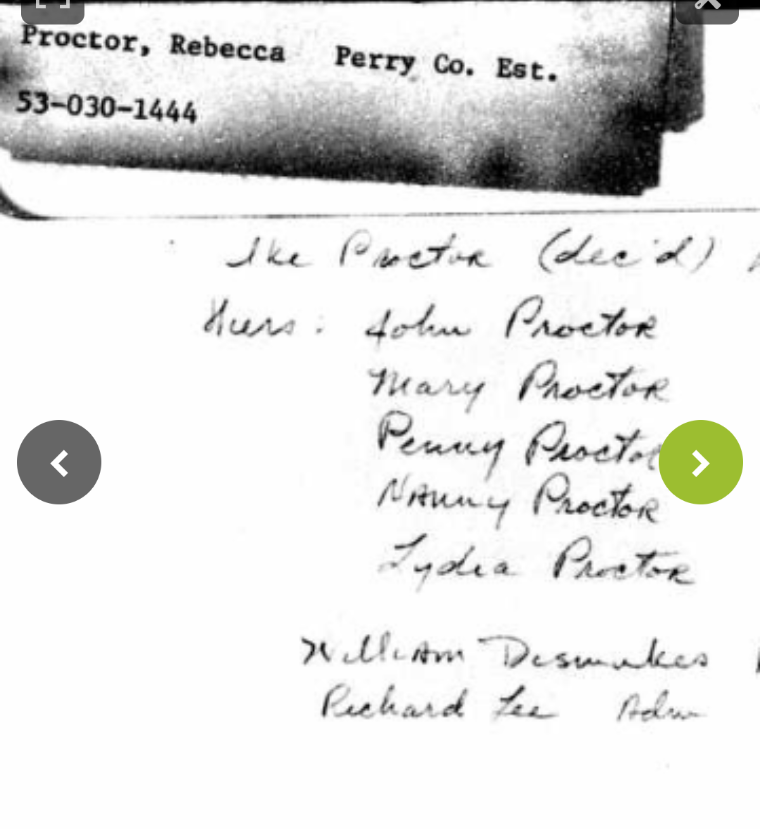 While I looked into Ira, his will in Perry, his land divisions all the way back in Anson, NC and the interactions of his oldest son, John, both in Anson, NC and Perry, Alabama, the one person I had totally forgotten and accidentally found, who had also left an estate,was his wife Rebecca.

Rebecca's maiden name is yet unknown, but certain close relationships could suggest it's possibilities. Her estate was probated in Perry County in 1819 and suggests a demise in the same calendar year. Above is the first page of her estate.

There are 3 glaring questions to be gathered from this list either by inclusion or omission.

Why is Abner Proctor not named? As the youngest son, he was about 4 when his father passed and about 14 here. I know from his father's papers that Solomon Lee and Ethelred Allen were named as his guardians. Solomon being a son of Rebecca's Administrator and Mr. Allen his son-in-law. Abner would be the executor of his brother John's estate in 30 years to come. Why was he omitted? 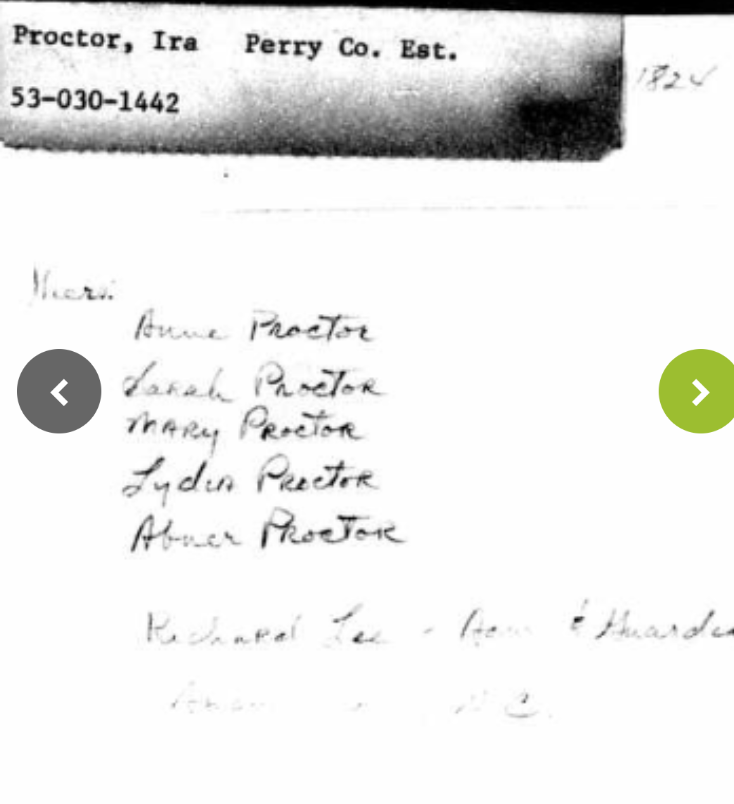 Now this is the same listing of heir's from Ira's estate. Notice the names of Sarah and Abner, who are missing from Rebecca's. Anne on here, I discovered, is the same person as Nanny on Rebecca's.
But Rebecca lists John, and Ira's don't. Rebecca also lists a Penny.


Ira Proctor was presumably born in Edgecomb County, NC, possible son of an Abner Proctor, based on other research found online, not my own. He first appears in the 1800 census of Anson County, NC as a male between 26 and 44 with an adult female in the home in the same age group. It can be safely presumed that this is Ira and Rebecca.

There are 5 children in the home, 3 boys and 2 girls. Abner Proctor was not born until 1805, so two of the others could possibly John and Ira, Jr., the later who is mentioned in the earlier dated estate papers of Ira, Sr., but was apparently deceased by 1817, when he is no longer listed with the others.

Of note, a Linny Proctor is listed in the 1790 Heads of Families for Anson County, in a female-headed family of 6 females and 2 young males. Online family trees list the following family tree for Ira Proctor:

This Linny could have been the wife of a John Proctor, who is said to have been born in Spotsylvania, Virginia about 1718 and married to a wife named "Leanna". He died about 1790 in Anson County. This John Proctor left a will in Anson County in 1790 and named his wife, Linny and two sons, William and Sterling. He did not name his daughters, but the 1790 census of Linny indicates they had some. 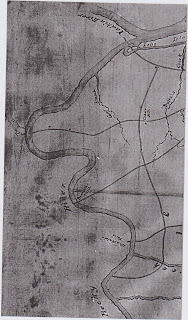 Ira Proctor first shows up in the Deeds of Anson County on March 25, 1799 in Book FG Page 102.
He purchased 2 tracts of land from John Hattaway for 300 'Spanish milled dollars". The tracts were located on the Southwest side of Boggan's Branch of Gould's Fork. Owners of neighboring property were named as "McNatt", William May, Joshua Hodges, and Morgan Brown. The Witness was Benjamin Parrimore.

The second deed is dated September 3, 1807 and is found in Book LM on Page 273. He adds to his land on Gould's Fork by making a purchase from his neighbor, William May, the Carpenter. I suppose his occupation was named to differentiate him from another William May in the area. It was signed by William May Jr. for William May, 'Carp', and witnessed by Daniel May.

Two years later, on November 3, 1809 is when in Book NO Page 195, appears "Rebecca Proctors Thirds or Dower", wherein 109 3/8 acres is set aside for Rebecca Proctor, widow and relict of Ira Proctor, deceased. The dower is mentioned as meeting the lands of William Dabbs and a Mr. Teal.

Then on Nov 8, 1814, the 'Division of Ira Proctor's Land"  is found in Book PQ Page 197 of Anson County and names John, Ira, Abner, Lydia, Nancy, Sarah and Mary. It was signed by J. Holmes, Joseph Newsome and John Grace.

By 1830, John Proctor and William Lee and his wife, Lydia Proctor Lee, were giving Power of Attorney concerning their shares of Ira Proctors land in Anson County to Abner Proctor, and stating that they lived in Perry County, Alabama and most certainly in the 1830 census of Perry County, a William 'Lea" is living right next door to John Proctor.

Rebecca Proctor seems to have passed away in 1819. By all reason, she should appear in the 1810 census of Anson County. The estate records of Rebecca, Ira and oldest son, John, all appear in Perry County, Alabama, but none of them show up in the census records there until 1830.

Three of the daughters of Ira and Rebecca Proctor were married in Anson County, North Carolina, between 1820 and 1830. These years may be approximate and incorrect.

Instead, in 1810, the only Proctor I found in Anson County was an Amy or Amey Proctor, with 4 children. She's living near my ancestors Stark Ramsey and Ludwell Carpenter, whom I know lived in the Burnsville area of Anson County.

Who was Amy? At first I thought Amy might have been Rebecca. I've seen women, especially, go back and forth between their first and last names. But then Amy shows up again in the 1820 census, and I know Rebecca has deceased by then, in Perry County, Alabama, no less.

Amy Procter is over 45 in 1820 with another young woman in her home. Also listed in "White" is a young man, Brinkley Proctor. He could have been her son.


But, interestingly enough, they are not the only Proctors in Anson County, NC in 1820.


In Allen, there is a William, but transcribed rather confusedly, because on the actual document, it gives his name as "William Proctor alias Lee", indicating he was known as both William Proctor and William Lee. That's a very, VERY interesting entry. But interestly yet more to me was the fourth Proctor living in Anson County in 1820.


Penny Proctor, a young mother with two daughters. I know the names of those two daughters, and that is another post yet to come.

In the estate records of 1817, all those are listed with the exception of Ira, Jr.

In the estate records of 1819, for Rebecca Proctor, in Perry County, Alabama, the following heirs are listed.: John, Mary, Nanny (aka Ann, aka Nancy), Lydia and Penny.  So, again, why wasn't Penny listed among Ira's heirs? Why was Abner and Sarah not listed as an heir of Rebecca Proctor? Could Ira Jr. have been old enough to have married at the death of his father -to Penelope, aka Penny and left her a widow in Anson in 1820?

Penny Proctor would marry Asa Henson/Hinson in January of 1823, in Perry County, Alabama. Together, they would have 3 children in addition to the ones she already had. Asa Henson was included in a Quitclaim Deed dated December of 1831 in Anson County, NC along with Benjamin and Moses Holmes and Solomon and David Lee, all of Perry County, Alabama, transfering their interests -as heirs of Ira Proctor- in a tract of land formerly belonging to Ira Proctor, deceasd , 'for love and affection- to Abner Proctor, youngest son of Ira Proctor.

In addition, in must be recalled that Solomon Lee and David Lee were brothers and sons of Richard Lee, administrator of both the estates of Ira Proctor and Rebecca Proctor.

The estate records of Rebecca Proctor would clear up at least one of these questions. 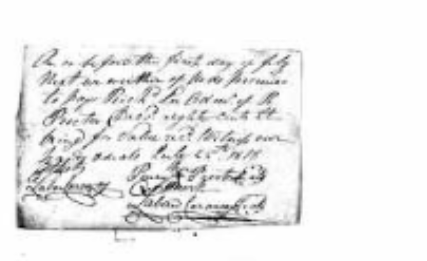 "North Carolina, This day William Mendenhall personally appeared before Jeremiah Benton, Esq and made affirmation that the above account $24.25 against the estate of Rebecca Proctor, deceased, $12.50 against the estate of Sallie Proctor, deceased and Three dollar and fifty cents for Nancy Proctor is true to the best of his knowledge.....Jan 4, 1819."

So Rebecca, Sarah aka Sallie, and Nancy Ann aka Nanny, all fell ill in 1818 and were treated by Dr. Mendenhall. Rebecca and Sallie passed away, ie why Sarah is not listed in Rebecca's estate records. Nancy survived the illness and married John Holmes.

Page 4 of the Estate of Rebecca Proctor is a receipt from John Grace for the purchase of wheat and bacon. Signatures were that of John Grace and A. Caraway, JP. I remember from land records that John Grace was a neighbor of the Proctors on Gould's Fork in Anson.

The next section brings in Penny Proctor once more.

"On or before the 1st day of July next I do promise to pay Richard Lee, admin of Rebecca Proctor deceased .80 cents being for value recieved witness one hand and seal."

Signed by and attested to by Labon Caraway.

The inventory of the estate was simple, domestic and agricultural. The buyers of most of it being Penny, John, Mary and Nanny Proctor with a few purchases by Pleasant Little and Joseph Newsome.

Rebecca's estate record only answered one question and that was the fate of daughter Sallie Proctor. It left me with more, like why she did not list Abner as an heir and also, if Penny Proctor was her heir, why wasn't Penny an heir of Ira in 1809-1814 estate records?

So far, this is what I do know:

May the digging continue. 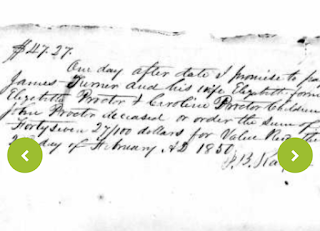 Posted by Jobs Children at 8:07 AM