I begin where I left off in my last post, with a deed in Anson County, North Carolina. 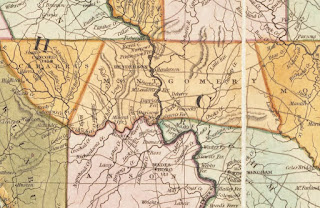 This particular deed is found in Book Y Page 35. It is dated December of 1831 and everyone living mentioned in the deed was living in Perry County, Alabama. But they all descend from families who had originally lived in Anson County and most of the individuals mentioned were also probably born there. But the deed presents a conundrum. The deed, being a factual document, obviously unseen by the individuals who really could not get past Alabama, is at odds at what descendants of these individuals have surmised concerning their own ancestors.

I have found these individuals in Perry County, Alabama. Other people have also researched them already and some of the documentation they have attached to them is factual, others are not, but apply to other people of the same name, somewhere else. The deed implies, nay, not only implies, but proves, declares, that these individuals are related. But in the family trees of Alabama, some of them have been hooked to the wrong wagon, or in one case, it appears an imaginary person has been completely invented and plucked out of thin air, because I can't even find the existence of such an individual at all.

Yet again, in coming from the roots up, instead of starting from the branches down, I'm in conflict with what was commonly accepted, that was based on what developed from grasping at straws, or in that one case, complete conjecture.

Deed Y 35 follows immediately Deed Y 34, named " William Lee and others to Abner Proctor". Y34 is a power of attorney, wherein William Lee, his wife Lydia Proctor Lee, and her brother, John Proctor make Abner Proctor, the younger brother of Lydia and John, their 'lawfull agent and attorney' to sell and dispose of their share of their deceased fathers, Ira Proctor, property in Anson County, NC.

It begins, "Benjamin Homes and others to Abner Proctor"

'Know all men by these presents tha we Benjamin Holmes Moses Holmes Solomon Lee David Lee and Asa Hinson all of the County of Perry and State of Alabama for and in consideration of the natural love and affection which we have for and bear unto Abner Proctor of the same county and state as above also for the sum of $1 to us in hand paide by the said Abner Proctor..."

This is what is known as a Quitclaim deed, wherein a piece of property is transfered from one family member to another (usually) for a nominal fee ($1.00), a legal way to give something away.

Continuing, "piece of land in the County of Anson and State of NC situated on Gould's Fork Creek bounded on the North by land formerly owned by James Holmes......being a part of a tract formerly owned by Ira Proctor and descended from him to John Holmes in right of his wife Nancy, formerly Nancy Proctor containing....... and we the said Benjamin Holmes, Moses Holmes, Solomon Lee David Lee and Asa Hinson for ourselves our heirs......forever warrant this tract of land to Abner Proctor.

I already know that Gray Allen was a family member and had married a daughter of this family. I would not doubt that Purvis Johnson might also be a Holmes/Lee inlaw.

The facts clearly stated in this deed are in fact, corrobarated by another document located in Perry County, Alabama, in Will Book B Pages 277-278, wherein Benjamin Holmes wills all of his property to his named nephew, James Lee.

And forward I go.