In the mode of researching entirely different branches of my family tree, I've decided to occasionally step away and spotlight an individual here and there, who may or may not be a direct ancestor, but who ended up in this massive family tree of mine that continues to grow daily.

Carrie Ina Whitaker Ingram is one of those individuals. She lived a brief life, but left descendants, and those descendants seem totally confused and have no idea who she was or even that she existed at all. This is the main reason I have decided to feature her.

Carrie I Whitaker was born September 5, 1897 in Stanly County, NC and passed away on January 6, 1919 in Steele's, Richmond County, North Carolina. Her parents were John Wesley Whitaker and his wife, Sarah Ann Hudson Whitaker. She fits in my family tree, not once, but twice, from each parent.

John Wesley Whitaker, her father, was born in March of 1856 in Stanly County, the son of Samuel Nelson Whitaker and wife, Sophia Murray Whitaker. Sophia was the sister of my third Great Grandmother, Priscilla Murray Aldridge, making John Wesley a cousin, some times removed.

His wife, Sarah Anne Hudson, was the daughter of Burwell Hudson and Sarah Ann Lee Hudson, and sister of my second Great Grandmother, Nancy Caroline Hudson, or my Great Great Great Aunt.

So Carrie, as their child, sits firmly on a twisted branch of my tree.


The family originated in Stanly County, North Carolina, but by 1900, had moved into Cabarrus County to work in the many Cotton Mills being established there. Carrie was one of the younger children and first shows up in the 1900 census as a 2 year old.

Ten years later, all of the children but Carrie and her younger brother, Otis had flown the nest.
John B, although just a year younger than Otis, was not a child of the couple, but a grandchild.
Sarah claimed to have been the mother of 10 children, with only 7 living. 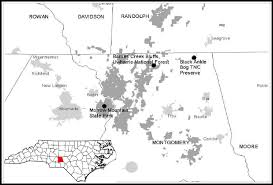 The family was now living in Montgomery County, North Carolina, on the east side of Stanly County, and not Cabarrus, on the west side. John Wesley had bought a farm on mortgage, in the Uwharrie community, in the midst of the Uwharrie Mountains.


Two days after Christmas, on December 27, 1913, just 3 years later, Carrie I Whitaker would marry Milton Lacy Ingram, in Montgomery County, North Carolina. The document claims that she was 18, however, she had actually just turned 16 that September.

Lacy was the son of a Preacher. He was born in Anson County, but raised in Montgomery. His parents were Rev. Hugh Montgomery Ingram and Susan Elizabeth Teal Ingram. Rev. Ingram grew up in neighboring Richmond County, but had moved to Anson, where Lacy, one of his younger children, was born, before moving to the Star and Biscoe area.

Carrie was not Lacy's first wife. Nearly a decade older than Carrie, Lacy had been born on March 1, 1889 and had married a young girl named Veola Emmalou Bean on March 18, 1906, when he had just turned 17, and she was 18.

They had one child, a son named Frank L. Ingram (thought to be Franklin Lacy Ingram) on February 25, 1909.

In 1910, the fledging family is found living in Biscoe, where Lacy is working as a day laborer at a Planing Mill. Veola has had one child with one living, Frank.

I do not know what happened to Veola Bean Ingram. She may be buried in the Old Archibald Freeman Cemetery with her mother who died in 1914, in an unmarked grave (or collapsed marker grave). What we do know is that 2 days past Christmas, in 1913, Milton Lacy Ingram married Carrie I Whitaker.

Ten months later, on October 20, 1914, the couple had their first child, a daughter they named Ina Mae Ingram. Her delayed birth certificate suggests she may have been born in Randolph County.

I'm not sure if there were any more pregancies in between the birth of Ina Mae and the birth of a son on January 6, 1919, when Ina Mae would have been 4 years old, but the unforntunate little fellow was born into a horribly fatal flu epidemic.


Chances are, Frank and Ina, just vunerable children, were probably staying in a healthier environment, and away from Carrie and Lacy, perhaps with grandparents.

Both Lacy and Carrie lost their lives in this horrible epidemic, and presumably the newborn son, as well. I can not find a name or a death certificate for him. The papers reported a total of 94 deaths at the time, including them. 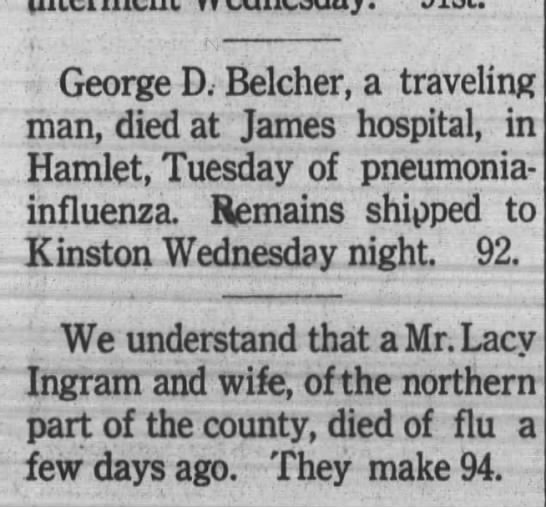 Carrie I Whitaker Ingram was only 21 years old when she died. Her death certificate gives the cause of death as Influenza and Miscarriage. She died January 6, 1919, the same day her son was born. It is presumed that he also died that day. Her husband had died just 2 days earlier on January the 4th.
This episode of what would be known as "The Spanish Flu" was like nothing the citizens of North Carolina had ever encountered. With TB and Thyphoid Fever still running rampant, this Pandemic caused courts to be cancelled, businesses to close and churches to shut their doors for a season. The "Richmond Dispatch" reported just 10 days after Carrie's death, that the toll of victims in just Richmond County alone had reached 114. It had began in Wilmington , NC and had worked its fatal way westward and the citizenry were taken unaware. It killed young and old alike. Mercifully, the children, Jack and Ina Mae, were spared.
Unfortunately, it seems, none of Jack's mother or father's people were able to take him in. With a large number of other children, orphaned for multiple reasons, he was sent to the Thomasville Baptist Orphanage in Davidson County, North Carolina.

There are pages and pages of these poor children. Epidemics of many kinds abounded those days, along with a war that took many young fathers and left mothers destitute and unable to care for her chidlren. If you are researching an ancestor, who was a child during the early part of the century, who may have lost one or both parents, and they disappear from record, just to reappear as an adult, try looking in the census records for the childrens homes and orphanages, where they are usually listed as "inmates", with no negative connotations. These were children's homes, not juvenile correction centers.
Frank would marry just a few years later, in 1924, to a girl several years older than he, Nellie Pankey, who had also lost her father in the 1919 pneumonia/influenza epidemic. He was 15.  They would first more to Chatham County, where he would find work in a sawmill. They would later move to Asheboro, in Randolph County, NC where Frank would find work through the WPA and had worked his way up to Foreman. He fathered a sizeable family and lived to be 63, passing away in Charlotte, NC.
Ina Mae was a little more fortunate, in that her mother's parents were still in good health, and lived fairly long lives. She went to live with them, as they were already raising one grandchild, John Boyd Whitaker.

She grew up in the Steeles Township area of Richmond County, the northwestern arm of the county, just south of Mt. Gilead in Montgomery County and not far from the Anson County border on the west.

Ina Mae would also marry young, at 18, on May 7, 1932, to Lewis Joshua Hudson. The marriage would loop her back into the Hudson family tree yet again. If you will recall, Ina Mae was the granddaughter of Sarah Anna Hudson, daughter of Burwell Hudson, who would die of pneumonia in the Civil War. Sarah had one brother, Marion Morrison Hudson, who was quite the charactor. While married, Marion would a number of relationships with other women, of which two, that I know of, resulted in children being born. One of these relationships was with Mary Hudson, known as Polly. This couple was covered in my post a few years back, "Sunday Black Sheep: The Abashing Story of Marion Hudson." Polly was younger than Marion by about 7 years, but she was the half-sister of his father Burwell, sharing a father, William Joshua Hudson, by different wives of his, making her, genetically, his half-aunt.  There son was named James Franklin Hudson, and he settled his family in Montgomery County, NC.  Lewis Joshua Hudson, Ina's husband, was the son of James Franklin Hudson.  This relationship would make Carrie, Ina's mother and Frank, Lewis Joshua's father, first cousins.  Down this route, Lewis and Ina would be second cousins, but a little bit more, considering the incestous nature of Franks origins. But as if this endogamy was not enough, Lewis Joshua Hudson's mother was Araminta Laura "Minty" Whitaker. Minty was the daughter of William M. Whitaker and a woman named Lizzie Hendley. William M Whitaker was the brother of John Wesley Whitaker, Carrie's father. So Carrie and Minty were also first cousins, making Ina Mae and Lewis Joshua second cousins down an entirely separate alley. The ties get a little more tangled, though not genetically, as William M. Whitaker had married Elizabeth Norwood, the daughter of John Norwood. John Norwood had married the widow of Burwell Hudson, Sarah, after his death.
What a tangled web.

Ina Mae and Lewis would raise their family in Montgomery County. I noticed that the family trees of her descendants seemed to not know who she was, and had her mixed up with an entirely different Ina Mae Ingram who was born in Georgia. Her documents all name Carrie and Milton Lacy Ingram as her parents, and she was raised by her grandparents, Carrie's parents, so the path is very clear. It's unknown how many families in our area were torn apart by this terrible epidemic and how it changed the course for the individuals who survived. Another generation left in tatters.