I've been purviewing my CD collection of old Stanly County Court records again. One day, one day, I'm going to transcribe the ones of these suckers, that have not been transcribed already, and make them available to the public somehow. There is so much information in them, but it might be information that some people would rather not find.

As can be expected, at any time in history, really, men dominated the Superior Court docket in the 1880's, the decade I'm currently in on the discs. Lots of land disputes and debts claimed, retailing ( selling illicit alchohol), affray (fighting), assault and battery predominated, but there was the occasional disturbing a religious service, larceny, ejectment, mismarking livestock, damaging crops, damaging livestock, slandering a lady, and even one or two murders a year, yes, even in the 1880's.

But for me, maybe because I am a woman, the most interesting cases, the juiciest ones, seemed to involve women. Perhaps, also, because of their potential genealogical value as well. 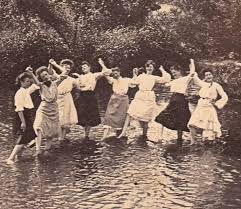 But women also got into some of the same mischief as the 'fellars'. They stole, they trespassed, they drank, they brawled...just..not as often. In fact, some in my family tree, the female members of a particular family, were notorious for fighting amongst themselves and with neighbors, it seemed. They had such a reputation for it that it has persisted to modern times. As my distant cousin, Don Aldridge, would inform me about my particular branch of Aldridges, who descended from these fighting female Murrays, his Aunt Maudie Scarboro had said of them, "They weren't nice people".

In fact, one story I will cover, when I finally get to the end of the dragged out court case, ( that is not a new phenomena, I've discovered), was a brawl between Sophia Murray Whitaker and Martha Ross Murray. Martha was the wife of Sophia's brother Benjamin Murray. They were bonded out of jail by a brother-in-law, John T. Turner, who was married to another Murray sister, Phoebe. 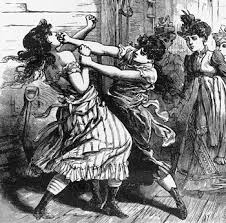 In fact, there were several names of female Stanly Countians that kept coming up in the court records, year after year, at various times, that I have dubbed them, "The Bad Girls of Stanly County".  Some of these 19th century ladies may, and actually, probably do, have living descendants. If you see a name that looks familiar, like a name in your family tree, and you don't want to admit that this naughty young girl was the saintly octogenarian your Dad remembered from his childhood, then don't tell anybody. Just remember, people who sowed wild oats in their youth, often became the most puritan of grandparents as they aged, if they survived their youth. It happens today. It happened then.

I begin this series (while I am also busy researching my Ramsey's and my Mountains), with the story of Sarah Eudy.

In the year 1886, one Sarah Eudy of Stanly County was brought to court,  charged with keeping a "Disorderly House". Now, this did not mean she was not a tidy housekeeper.

The online dictionary explains the term "Disorderly House" with one word, a term that most people would be more familiar with.


Wikipedia gives a bit more detail and background for the term, and the criminal charge.

A place where individuals reside or which they frequent for purposes that pose a threat to public health, morals, convenience,or safety, and that may create a public Nuisance. A disorderly house is an all-inclusive term that may be used to describesuch places as a house of prostitution, an illegal gambling casino, or a site where drugs are constantly bought and sold. It isany place where unlawful practices are habitually carried on by the public.


So, Sarah Eudy, in other words, was letting her home be used as a place where illegal activities were taking place to the extent it was a nuisance to the surrounding community.

Now, Sarah Eudy was a fairly common name in old Stanly County and neighboring Cabarrus. There were quite a few Sarahs. It was not going to be the Sarah born in 1800, or the Sarah born in 1885. It wasn't going to be the Sarah's who were happily married and having a steady stream of babies by the their husbands,  either. So, when all of the "Not" Sarah's were eliminated, it left by one.

Women in these positions opened themselves up to socially-condoned abuse as seen in this article from neighboring Rowan, where a woman's proposed reputation gave some young men impetus to harrass and assault her. 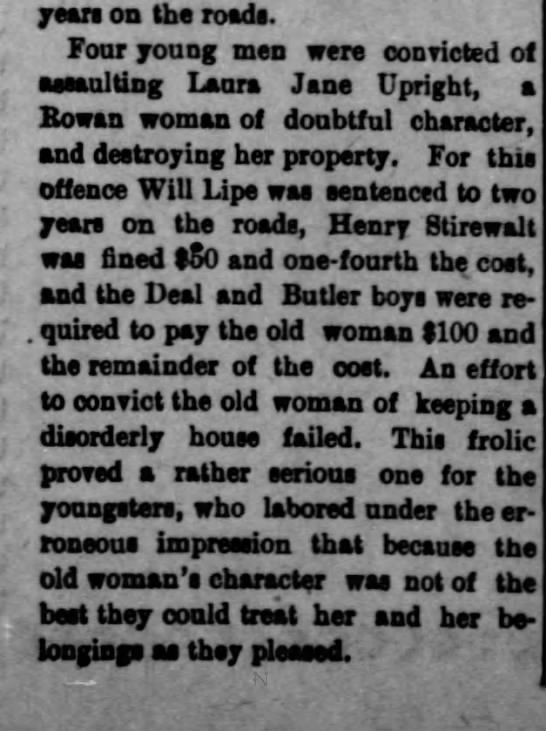 
I wondered if Sarah Eudy was connected to or related to this Julia Udy (Eudy), who was also arrested for keeping a disorderly house, about a decade earlier, in Cabarrus County. 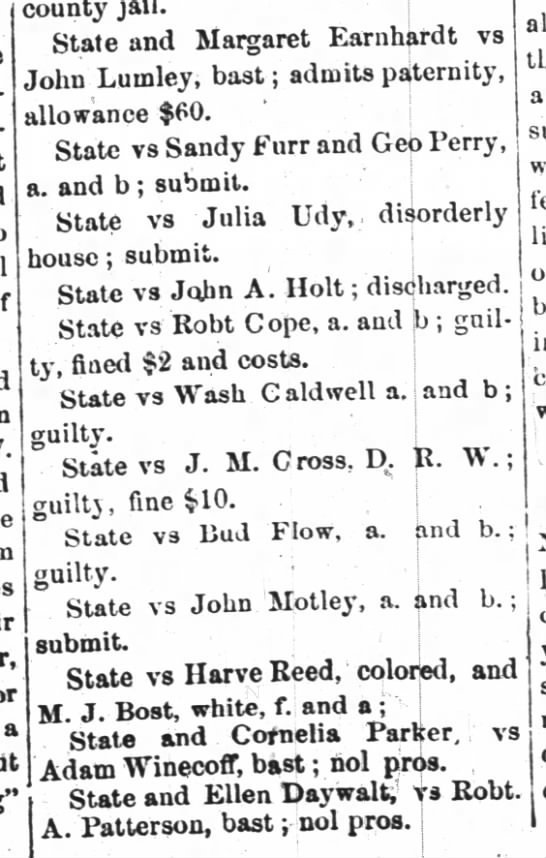 As you can see, the Victorian era was rife with women commiting crimes of conduct against social mores. Margaret Earnhardt and John Lumley were charged with bastardy, meaning they had a child out of wedlock, as did Ellen Daywalt and Robert A. Patterson. Cornelia Parker and Adam Winecoff were up for Fornication and Adultery. Harvey Reed, whose name I am familiar with, as he was a man of mixed heritage who had served as Civil War soldier, along with a few other free persons of color in Stanly and Cabarrus County. A white woman called M. J. Bost was charged with Fornication and Adultery in an illicit relationship with him. The morality police were very busy.

In her book, "Unruly Women, The Politics of Social & Sexual Control in the Old South", author Victoria E. Bynum, drew on records from the courts of three counties in North Carolina, one of those being Montgomery, a parent county and neighbor to Stanly. In addressing the issues of 'Disorderly Houses', Ms. Bynum noted:

'Prostitution was usually included within the general charge of operating a "disorderly house", rather than being the sole issue of an indictment.'

She also noted that, "Most of those accused of prostitution or of operating "disorderly houses" were poor women who lived in female headed households and lacked extensive kinship networks in their communities".


Sarah Eudy skirted the definition of those accusations. Due to the sensitivity of the charges she faced, and the fact that they might be an embarrassment to any surviving family members, I am not going to identify her in any clear way that anyone outside her familial bounds could identify. She shared her name with enough other females in the counties in which she resided that it does not specifically pin her down.

Sarah was by all accounts a beautiful woman. She was born in Western Stanly near the Cabarrus County line. Her family was of an unusual, nearly incestual structure. Like many of her generation, she was the daughter of a Confederate Soldier. Her father had outlived multiple wives. Her mother was his last and was the widow of one of his sons, making the relationship between his and her older children and younger children an unusual one of half-siblings/aunt or uncle combination and a genetic nightmare for descendants attempting to determine relationships among their genetic matches in this line. 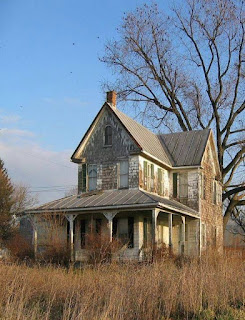 Her father died before she was arrested for operating a disorderly house, but her mother had not. She was not alone in her arrest, but accompanied by three other young women, it appears, one of them a family member.

It is unclear what exactly happened to her immediately after she was released from jail, as there was no 1890 census. But 14 years in the future, in the 1900 census, she was living in another county and with a brother. One thing that was clear, she had had a relationship with a single Stanly County man about her own age, and had given birth to a child with him.


The father of her child never married, and was clearly known to his daughter, as he was mentioned on her marriage license and her death certificate. He, however, was probably estranged from her, as he did not mention her in his will.

Sarah was very young upon her arrest and still in her late twenties when she became a mother. But her story was not over. At about 40, Sarah, despite her reputation, was married to a widower about 20 years her senior. Surprisingly, she had another child, while in her early 40's.

It wasn't long before her older husband left her a widow. After 2 years alone, Sarah would marry again, to another old soldier 20 years her elder. He was in his 70's and she had hit 50, but surprisingly, he outlived her by a few years.

Sarah's death seems particularly sad. She was just in her 50's, having only been remarried a few years. She died of chronic nephritis and extreme intoxication. She drank herself to death, and was very likely an alchoholic. The informant was her husband, who correctly named her parents, and she was buried very close to where she was born. 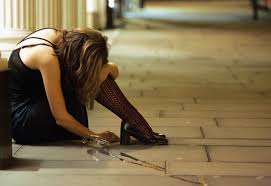 What had taken this woman to her station in life? She was no more or no less situated than most of those who surrounded her. I guess that answer lies in tragic void. Rest in Peace, Sarah, your house is now orderly.