I began by piecing together the individuals in this suite, which may be fun to complete some day, when I realized I was on the trail of the wrong Thomas Watkins, the Thomas herein shown, with his brothers, was much younger than the Thomas who married Tabitha (or Tobitha) Howell.

These were the children and grandchildren of James Watkins who married Phoebe De Jarnette. Thomas and he were closely connected, and probably brothers, but Thomas was not a descendant.


The Thomas Watkins I was looking for shows up in land records along with James and was more of a contemporary.  Land records also show a close residence to and connection to the Randle family, as well as being a neighbor to Jordan Howell, father of Tabitha.


Montgomery County, NC Land Warrants & Surveys 1833-1950 (Taking into account that these records included land that is now in Stanly County).

(Note: The following two land records also involved members of the Randle family.  4796 John Randle with  John  Randle & Peter Randle as chain carriers and 4797 Noah Randle with Benajah Randle as a chain carrier. More on the Randles later, however, it is a apparent this was likely one family.)

(Note: Will Stone was what could be called a land speculator. He, like the Crump brothers and Hugh Ross, owned immense tracts of land, that they would sell to settlers in regular increments during the early years of the areas formation).

Another factor in the whole "Who Was Thomas Watkins exactly?" factor was the presence of a Martha Watkins. She had close contact and was a neighbor of the family and extended members of the family. At first, I thought she may have been an unmarried sister, but a few land records revealed at least, a portion of her identity.

This declares that Martha Watkins was Martha Ann Ingram Watkins and daughter of John N. Ingram and was a widow. Of which Watkins, I have not yet determined. Several members of the Ingram family may have migrated to Mississippi with the Watkins family or vice versa, as they end up in the same area of Mississippi at about the same time.


The Ingram-Watkins Cemetery in Warsaw, Marshall County, Mississippi contains the graves of William J Watkins born in 1842 and Helen Ingram Watkins, born in 1827 and Thomas Ingram, born April 16, 1789, in Anson County, North Carolina and died February 28, 1869 in Marshall County, Mississippi. He was the son of Joseph N. Ingram and Winifred Nelms and married to Jemima. They were the parents of children named Winifred Pines Ingram and Phoebe DeJarnette Ingram, showing a definate link to the the Watkins family, and obviously a brother of Martha Ann Ingram Watkins, mentioned above.

These records show a close relationship between Thomas and James Watkins. They also show a connection to the Randles and that they were neighbors of Jordan Howell. Jordan Howell had married Martha Randle and Thomas Watkins married their eldest daughter, Tabitha or "Tobitha".

Thomas and Tobitha were still in Stanly County, formerly Montgomery County, in the early 1840's.

In the above link are mentioned the Stanly County land records involving Thomas and Tabitha Watkins in 1842 and 1843, selling their property to Tabitha's youngest brother, Richard Howell, probably before their move to Mississippi and another record mentioning C R Watkins, a probable nephew of Thomas. The deed to C R Watkins was witnesses by Enoch J Watkins, son of Thomas and Tabitha Howell Watkins.

I have not been able to locate him in the 1840 census yet, either in North Carolina or in another state. I do, however, believe the family was still in Stanly/Montgomery County because of the 1842 and 1843 land records and also because all of the children, even down to the youngest, James, in 1841, were recorded as being born in North Carolina. The oldest daughter of Thomas and Tabitha's son, Enoch, Ann Eliza, was born in Mississippi in 1850.

Enoch had married and was living next door to his parents in 1850. 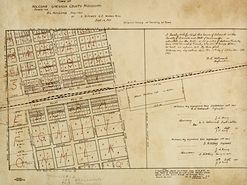 1850 was the only census Tobitha would show up in. In 1860, Thomas Watkins was head of the household with son Enoch's family.


By 1870, the county name had changed to Grenada and Enoch was the head of household with Thomas as a boarder.

The known children of Thomas and Tobitha Watkins were;

There were also a possible son and daughter older than Enoch born between 1816 and 1820 as shown in the 1830 census.

I have not completed researching this family. I am sure there is more to be found in the records of Mississippi and perhaps from  descendants who are conducting their own research.

What I do know is that Enoch Watkins married Elizabeth Wright from Duplin County, NC and died in Grenada County in 1892 and is buried in Springhill Cemetery there.

Son John Quincy Adams Watkins married first, Elizabeth Hammonds, who was buried in Grenada County in the same cemetery as his brother Enoch, and then married Martha Kennedy and relocated to Cherokee County, Texas, passing away in 1897.

Mary Watkins may have married a Clark and then later a Winborn. She is shown living with sister Jane in 1900 and 1910 in Mississippi.

Alexander Watkins fate is unknown. There were serveral Alexander Watkins and I have not found any proof or evidence that any of them were this one, son of Thomas, or links to any other siblings.

Pinkney S. Watkins moved to Yalobusha County and then served in the Civil War. He died in a POW camp in Illinois in 1865.

Youngest brother James L Watkins married Francis Rebecca Heath and raised his family in Mississippi. He died on June 1910 and is buried in Spring Hill cemetery with the family of his brother Enoch.


In the book "The History of Alexander, Union and Pulaski County Illinois" edited by William Henry Perrin is the following excerpt:


"Mrs L. J. Tucker, Jonesboro.....This lady was born March 9, 1839 Anson County, NC. She was the granddaughter of James Watkins, who came from Virginia. He married Phoebe De Jarnette who was descended from French Huguenots. She was the mother of Christopher Watkins, the father of our subject, who was a physician and planter. He was born in 1796 in North Carolina and died in 1872 in the same place. He married Jane E. Dunlap, born in 1812 in North Carolina, where she yet lives. She was the Great Granddaughter of Rev. Craighead, who fled from England during the persecution of the Protestants.........founded schools throughout.....
Mr. J. E. Watkins was the daughter of George and Hannah T. (Ingram) Dunlap, and is the mother of 8 children, of whom Louise J (our subject) and her sister Winnie W., wife of William Redfern, and the mother of Christie, Jenny and Winnie. Our subject was educated in the Carolina Female College, and was married to PJ Lowrie, who died in 1872 in Wilmington, NC. Our subject was again married in 1873 to Rev. J K Tucker of Anson County, NC. They came to Jonesboro in 1874, where he was a Principal of Schools. He died in 1881, while Pastor of the M. E. Church. Mrs. Tucker had one son by her first husband, Harold Watkins Lowrie. He was born April 19, 1861 in Ansonville, Anson County, NC , now a student at Vanderbuilt University, Nashville, Tennessee. His father was a merchant, grandson of Judge Samuel Lowrie of North Carolina and great grandson of Mr. Alexander, who was one of the signers of the Mecklenburg County Declaration of Independence. Mrs. Tucker is a member of the M. E. Church. "


The Watkins had impressive ties. And the search continues.