The Death of a Sugar Maple 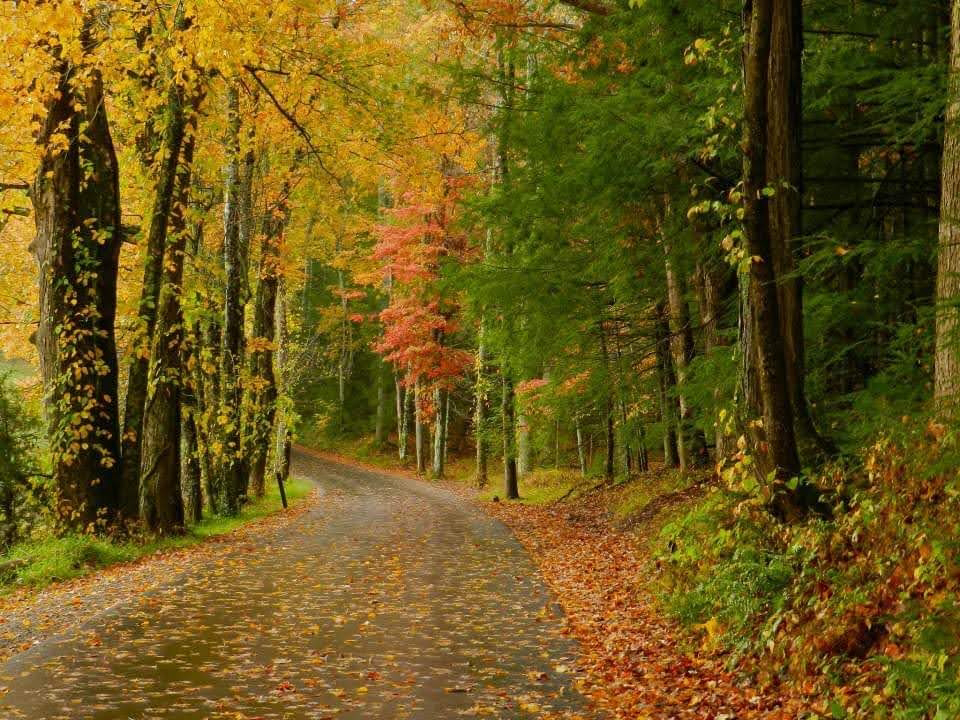 Today is Thanksgiving, traditionally, a day to join with loved ones and others close to you, enjoy the comaraderie,and give thanks for ones blessings, while eating too much good food. It's a national holiday and and a religious holiday. In my 6 decades of living, it also holds some of my dearest memories.
I just drove past my parents old house, the house I spent my school years in, from first grade to graduation, the place I always called home. I lost my mother 5 and a half years ago and Daddy, two years ago next month. The house has been sold and other people live there now.  It hasn't changed a great deal, barely at all. I see they have thinned out my Mom's heirloom plants. The burgandy-leafed plum tree no longer stands sentry on the right. The azaleas, so looming and magnificent in the spring have been trimmed to near death. I can tell that the person who lives there is a man, a man with no wife or children. A man who likes simplicity and plainness, who just wants an easy lawn to mow with no decor or ornamentation, no need for beauty and no value of what my mother loved or my daddy planted. 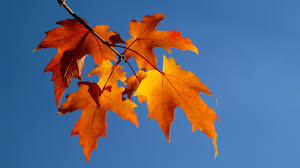 Every time I pass this house, still in the same town I live, still on a road I often travel, memories flood my mind and whatever I was feeling previously is swept away in an overwhelming sense of saddness, of  loss and of melancholy. With a blink, I can reimagine the home of yesteryear, when it was new and the shrubs were tiny and newly planted. I can remember playing in the enormous refridgerator box, left in the sideyard when we were moving in. I was 5 and my only job was to stay occupied, nearby, but out of the way.
I remember the large empty living room that became a racetrack for my big wheel as a paddled around in circles as fast as I could go. I remember the fence that lined the back of the property, and the horses that were there in those days when the old Coble barn was still a barn. The old brick Coble house is still there, but the Littles, who lived there then, are long gone. The barn still stands as well, but is no longer a barn, but a garage and shop. The barbed-wire fence, that had ripped my skin badly one time, is gone, and the field hasn't seen horses in many a decade, now businesses are creeping in on either side. 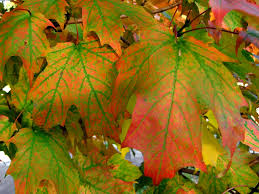 I recall my swing set, which sat in the backyard, and swinging as hard as I could, looking out over that field. I remember many things, and many Thanksgivings long past. At first, just the three of us, then a half-brother arrived and a half-sister. Then the heartbreaks and hard-living of dealing with their mental handicaps and the steps we had to take, the damages, both physical and mental, we had to suffer, because of their disabilities. I remember making quick my escape from the insane asylum that was living with two autistic, on the low end of the spectrum, children, who pitched fits, pulled hair, tore up homework and screamed to the top of their lungs, nearly every minute of every day, causing me to run away from home a few times,  and to marry early, too early, to a much older man. 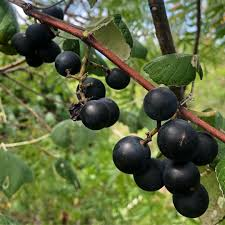 But one of the good memories was in the beautiful row of maple trees that lined a little branch that ran beside my house. There was a bright golden maple that shown its glory near the road, then a row of Sugar Maples, who were the most glorious of reds, oranges, yellows and greens, all on one tree, in the fall. When we first moved there, the road was narrow, and residential only. These beautiful trees lined the entire street nearly, and one could walk to the store on Main Street in the summer and stay cool in their blessed shade. Later on, as the State Highway people decided our street was a good shortcut for their trucks to travel to their designated lot, that the street needed to be widened, and they cut away many of the beautiful maples. I will never get over that travesty. But as for the ones that lined the creek, they survived, as they were not along the road.
I loved them all. There was the one who had a forked branch that swang out over the creek and made the perfect 'horse' for me to straddle and ride, up and down, better than those spring-loaded things at the playground. There were the trio that grew together with a short space in between that was perfect for Daddy to erect a porch swing in between, as a nice place for him and Momma to enjoy on a cool Sunday afternoon while the children played inside the fence. There was the tall one that brought up the rear, and whose lower branches fanned out like the skirt of an old Southern Belle with her whalebone supports. That one made for a clubhouse to be able to hide under. Yet, none of those mentioned was my favorite. 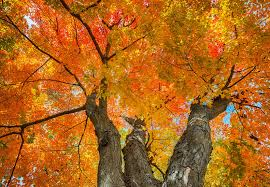 My favorite was this tiny, enduring little tree, who hovered under all the others, starved for the sun. Despite her height, she spread her branches wide and put forth the most beautiful, rich, deep colors of them all. Her trunk was no bigger around than a telephone pole and no taller than a 5 year olds shoulders. From that seat, which is what it became, she fanned out in all directions, her boughs staying low and trying to grasp sunshine from under all of her taller neighbors. She was perched right at the waterfall of the creek, from under which appeared a little pool that would fill with tadpoles in the spring and from which crawdads would dig many a hole for a home. Her neighbor boasted a healthy muscadine vine, which provided me lots of antioxidants as a child.
I spent many an hour and day in, under and on this tree, imagining the little people that might have lived there, making shoes from the muscadine skins, and clothes from the mildweed fronds, while playing in the lovely little waterfall.
During my last days at this house, as Hospice carried my Daddy away, I walked out to this tree. There was not very much of her left, only her two main, strongest branches, she was old and so was I. I watched my granddaughter, close to the same age I was when I first met this beautiful tree, delight in her low lying branches, that tempted a small person to climb upon them. I watched as the little tree seems to glow brighter, her lovely fall colors just as glorious as they had always been, although her branches were fewer. She seemed to enjoy another generation of little ones enjoying her beautiful limbs. 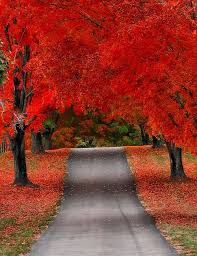 Today, Thanksgiving, I passed by the house, the barren yard, the solemn porch, the dead autumn grass. I glanced down the old wet weather creek, still hanging on despite the passage of time and road work. Big Goldie was still there and so was the muscadine tree, but my little friend the Sugar Maple was gone. How did she die? Did a summer storm take her and I not notice, or did the man who now lives there decide she was too old and frail to deserve to take up that spot along the creek? Or did she somehow know that the little girl who loved her so, who was now a grandmother and had lost both of her parents, would no longer be coming to visit and down to the creek to say hello?
Posted by Jobs Children at 12:22 PM