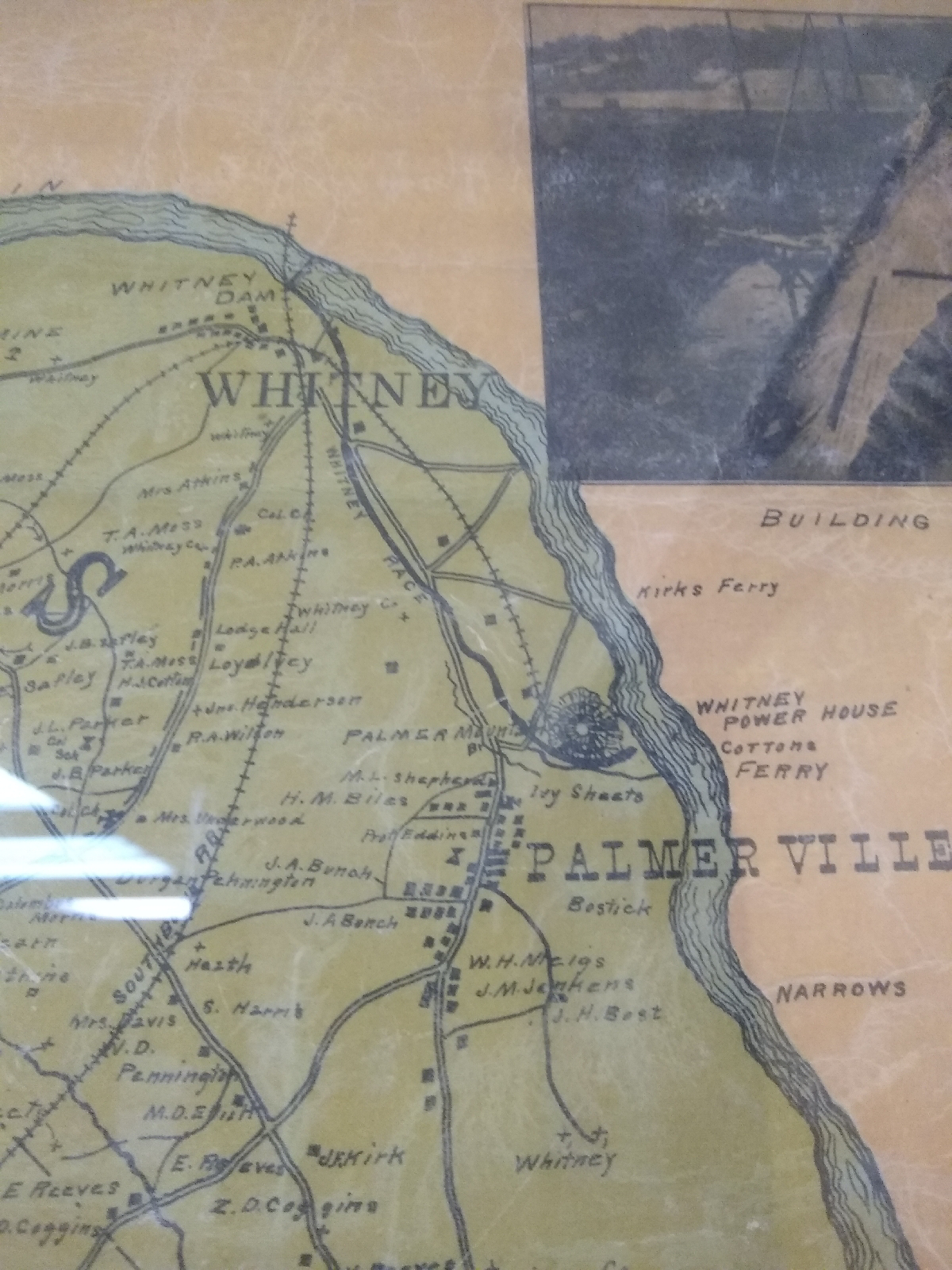 There's an old saying about too many irons in the fire. I'm guilty of that, but I haven't abandoned one of my research projects, The Mountains of Stanly County.
Everyone near and in Stanly County, North Carolina knows where Morrow Mountain is, because of the State Park that bears it's name. The park actually encompasses 5 mountains: Morrow, Hattaway, Sugarloaf, Falls and Mill Mountain. These, and the other small mountains in Stanly County are part of the ancient Uwharrie Mountain range, which has weathered many eons.
Some background,  genealogical research has taken me to spending lots of dusty time, in old deeds and records. Those records often used landmarks to describe where the particular plot of land was located. They named whose property it connected, or bounded. Often, bodies of water created a boundary, rivers, creeks and branches. Sometimes trees and roads we're named. Once in awhile, a mountain was mentioned.
Growing up in Stanly, I was familiar with a few of the mountains, because of the park, or because the mountain had a road named for it, like Nelson Mountain Road. But most of the time, I would read the deed and see a mountain I'd never heard of.
While that sweet gum mentioned in 1832 is long gone, and the roads, for the most part, have changed or even disappeared, the creeks and the mountains haven't gone anywhere.
It's one of my projects to find them.
Some, like Palmer Mountain, are named on old maps. 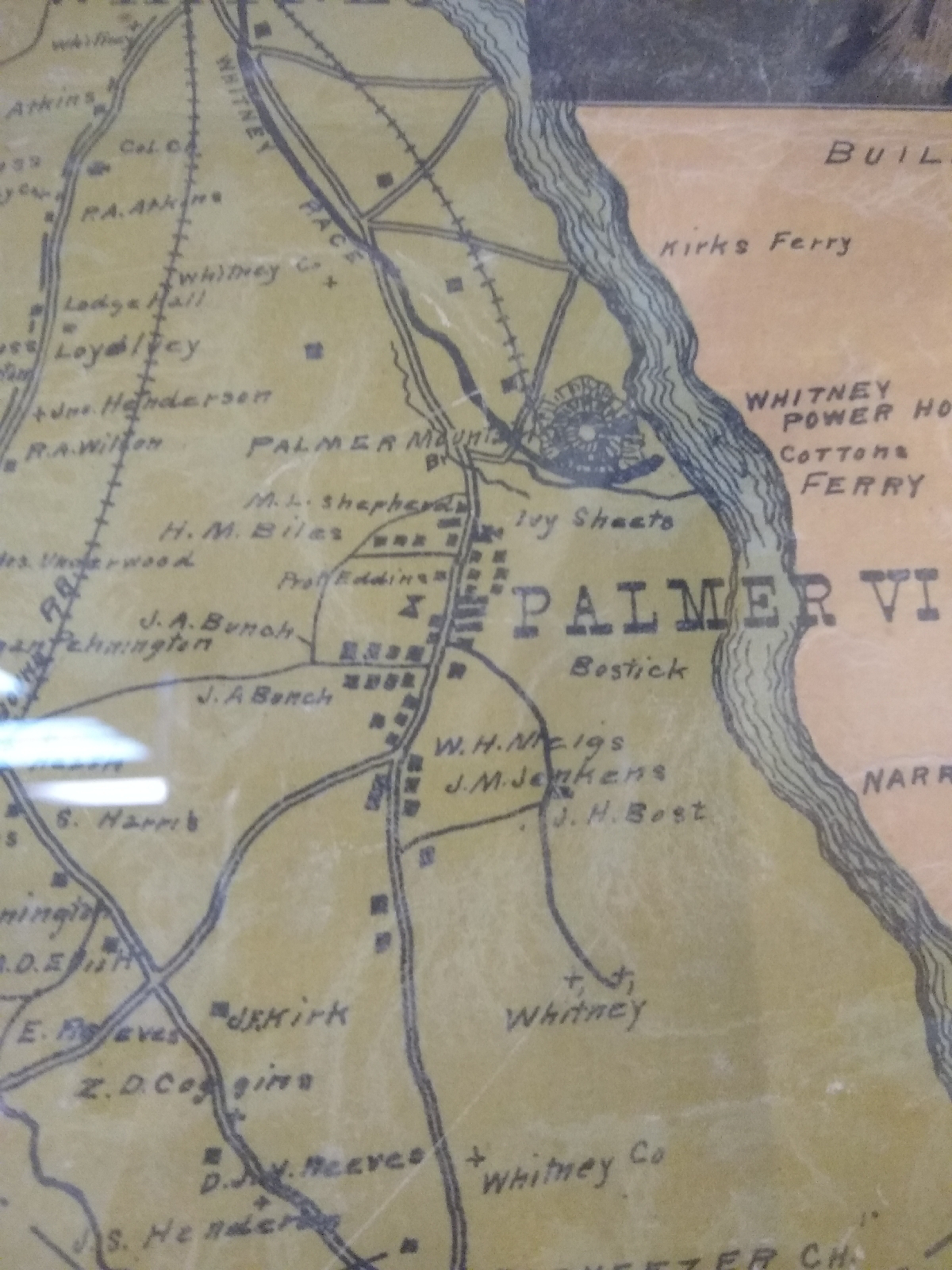 In this turn of the century map, Palmer Mountain is located in the town of Palmerville. Palmerville is no longer what you would call a town, but the church, and many of the old houses remain, along with new ones. The road still bears the name, and heads off of Hwy 740 just north of the town of Badin.
Currently, Palmer Mountain is an island. Back before the town of Badin was concieved, a family from which I descend, lived along the Yadkin River, on and around the small mountain, and started a successful business. Before long, the mountain, and a town bore the name of Palmer. 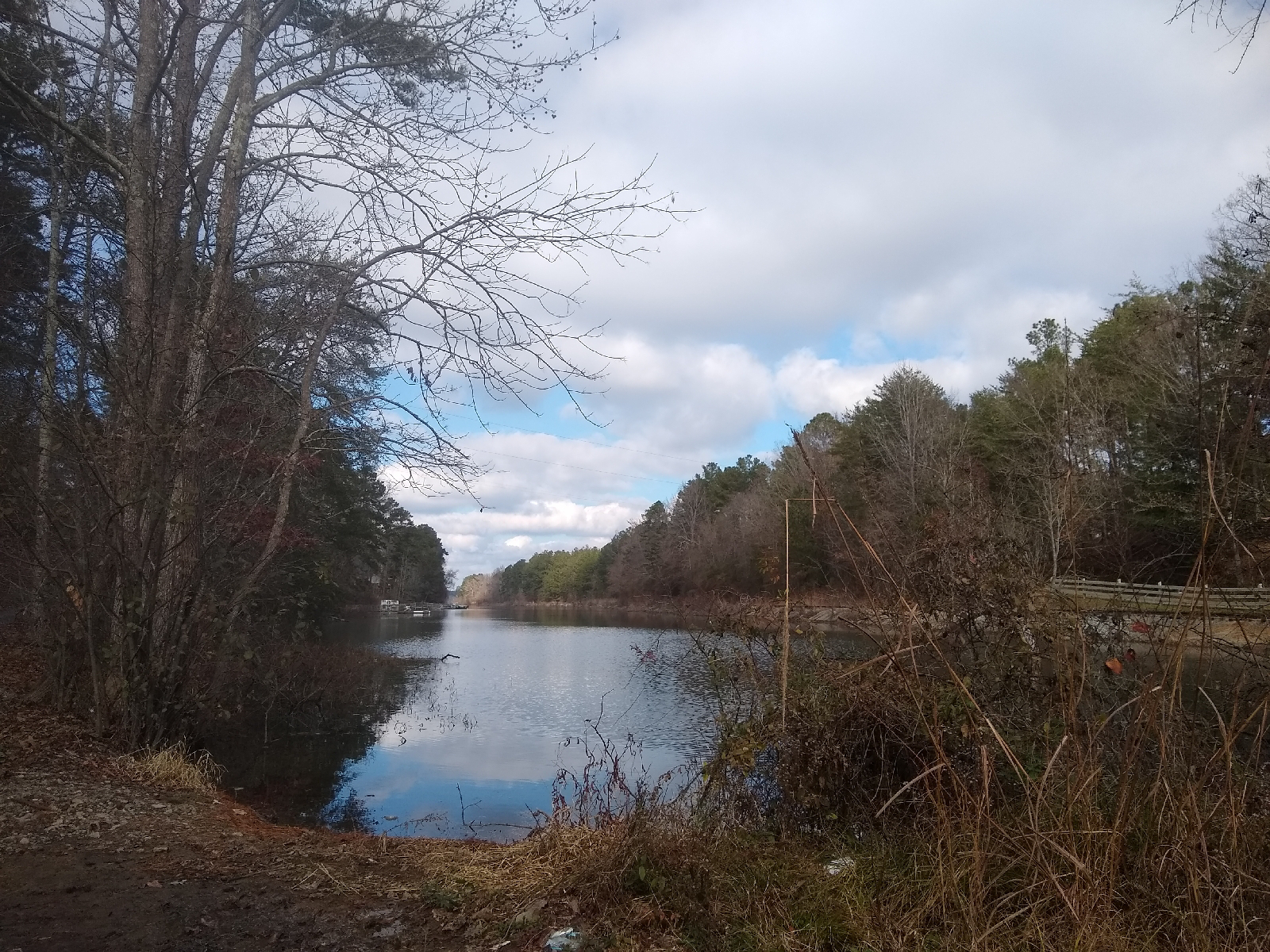 The foot of Palmer Island across the canal.
When the first attempt at building a dam was attempted upriver at Old Whitney, this canal was built around Palmer Mountain. The project would become bankrupt, but would later be restarted sucessfully again by a French Company several years later, but downstream from Palmer Mountain. Badin Lake and the Town of Badin would be founded. 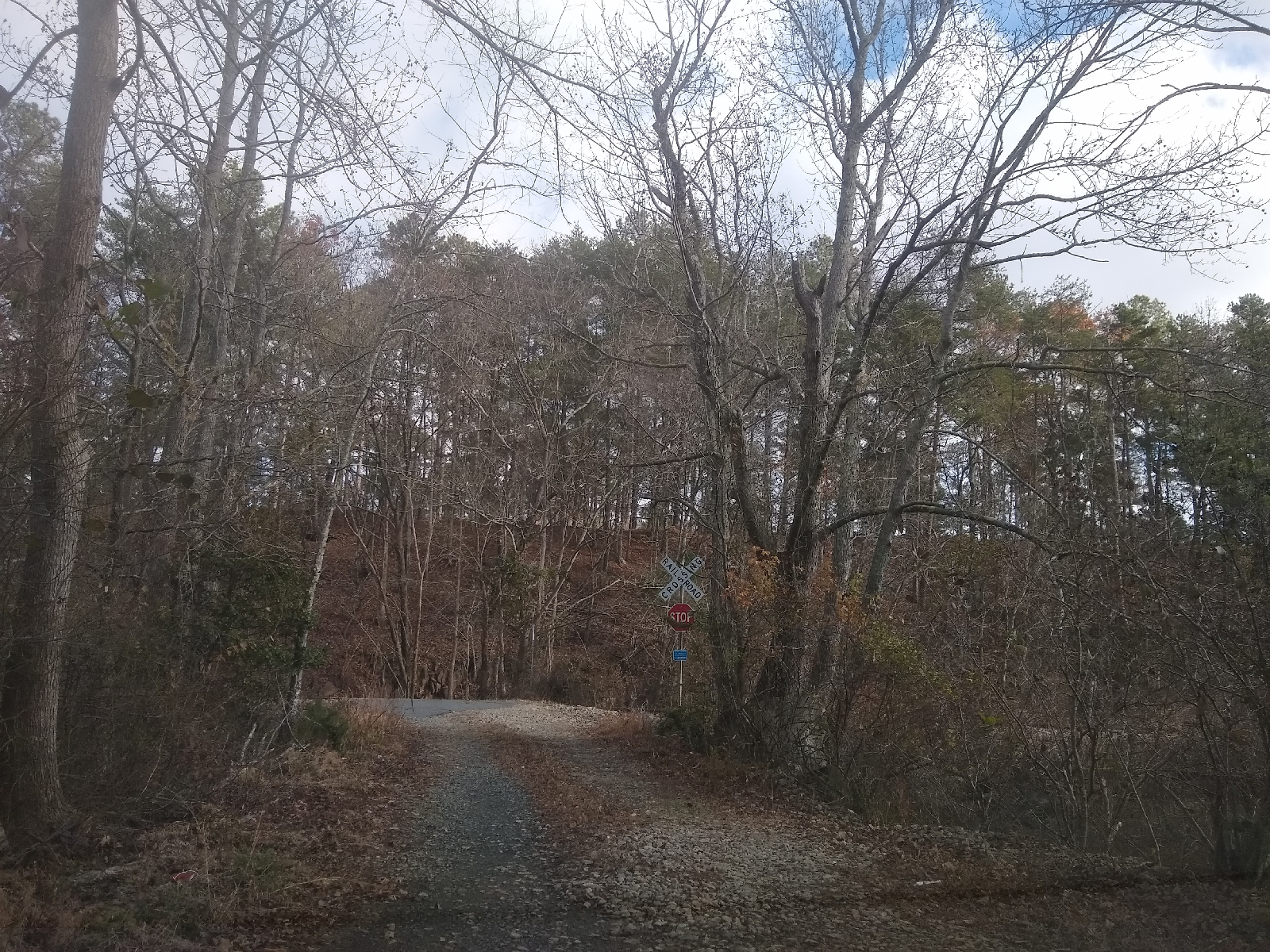 The road across the canal, over the railroad tracks, to Palmer Mountain starting to rise in the front. 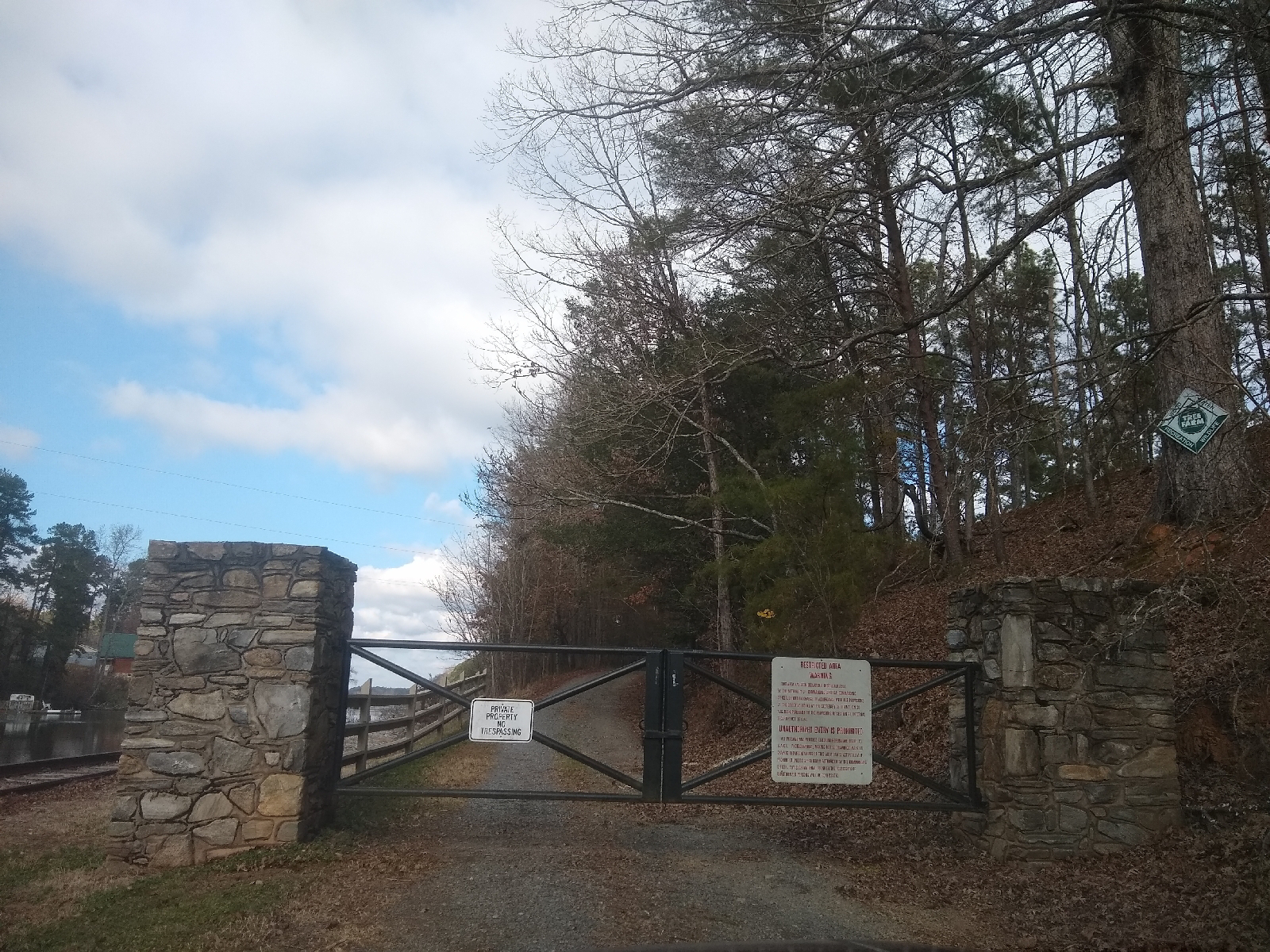 The gate to the road to Palmer Mountain, which is now privately owned. 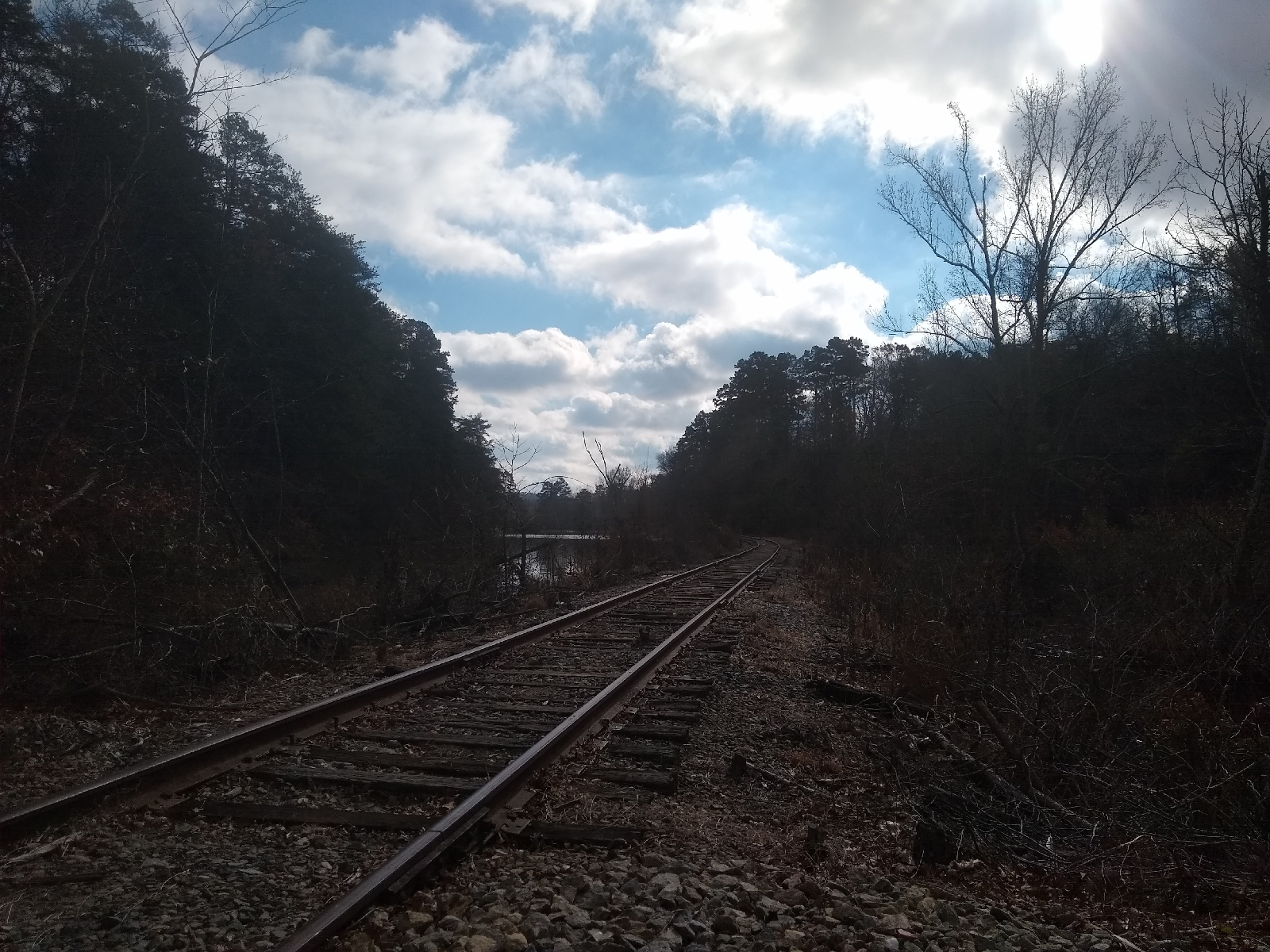 The railroad tracks crossing the canal. 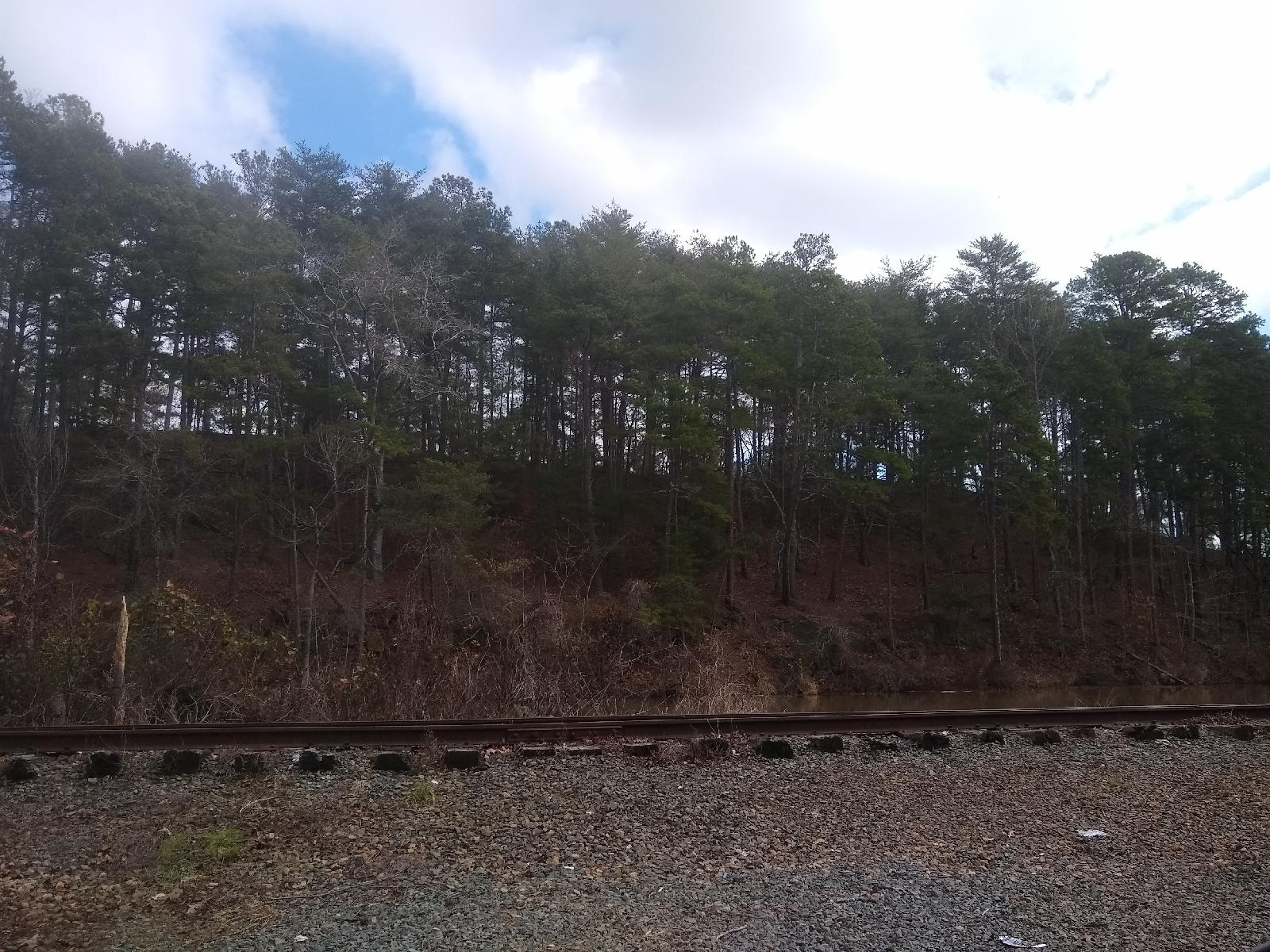 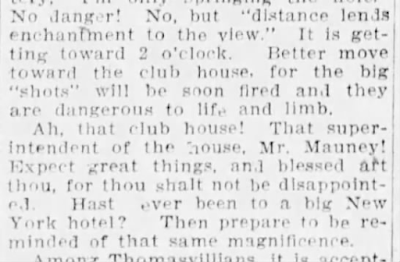 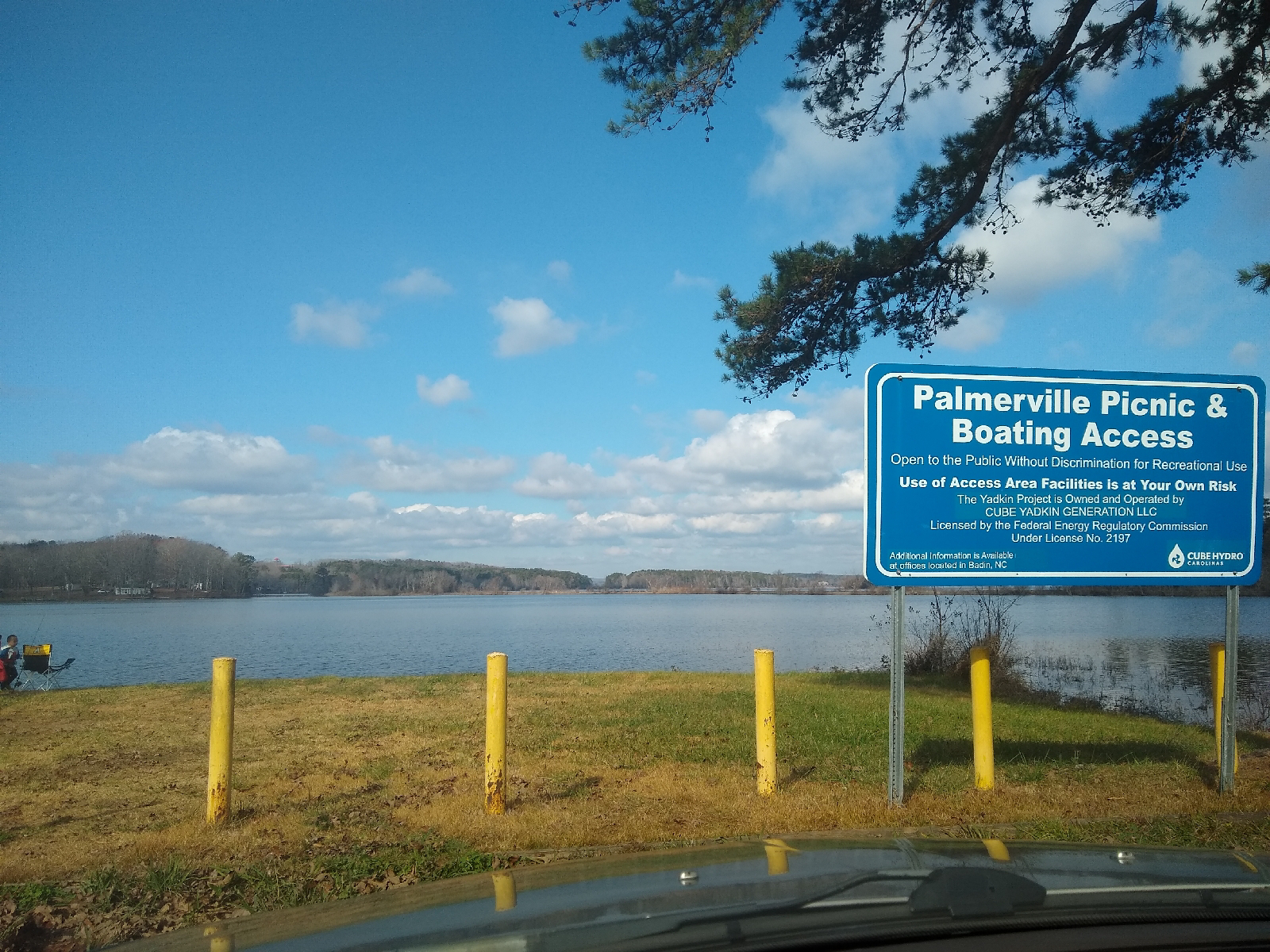 Palmerville Beach, a place of fond memories when it was a public site with camping, music, and a store/grill. 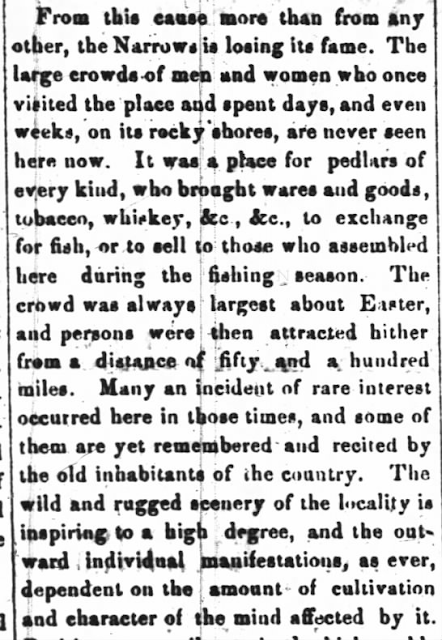 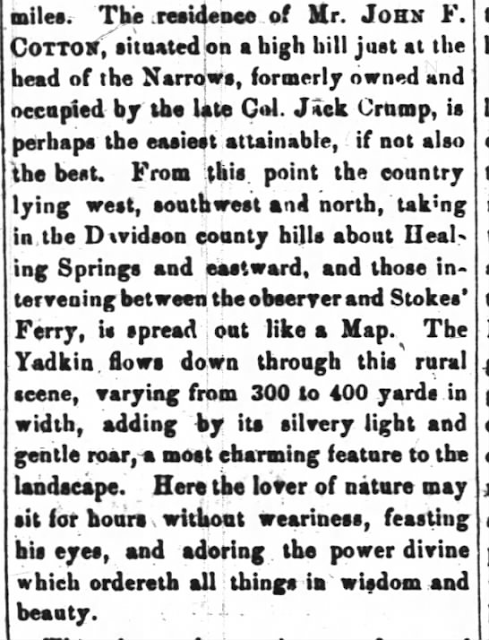 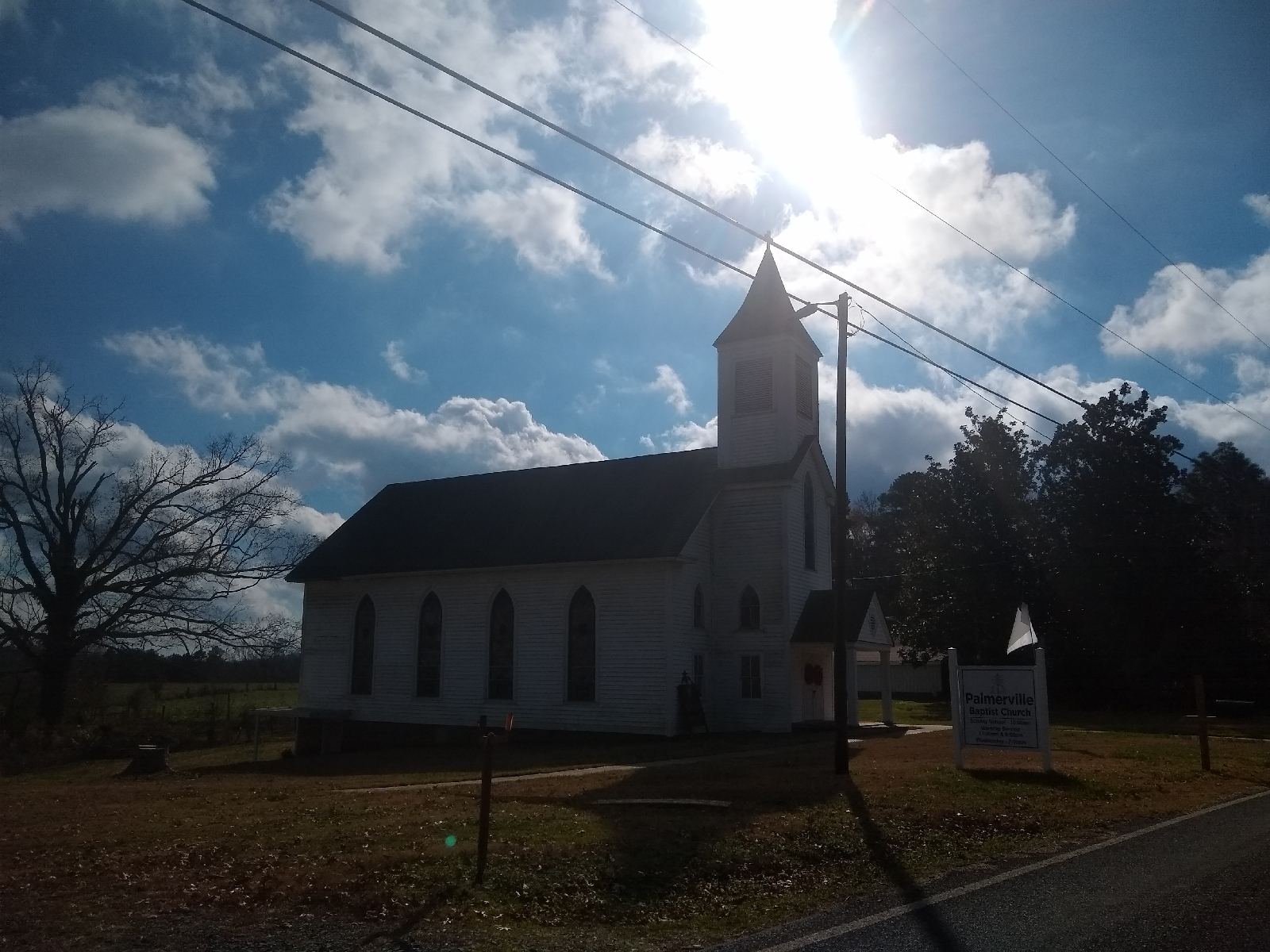 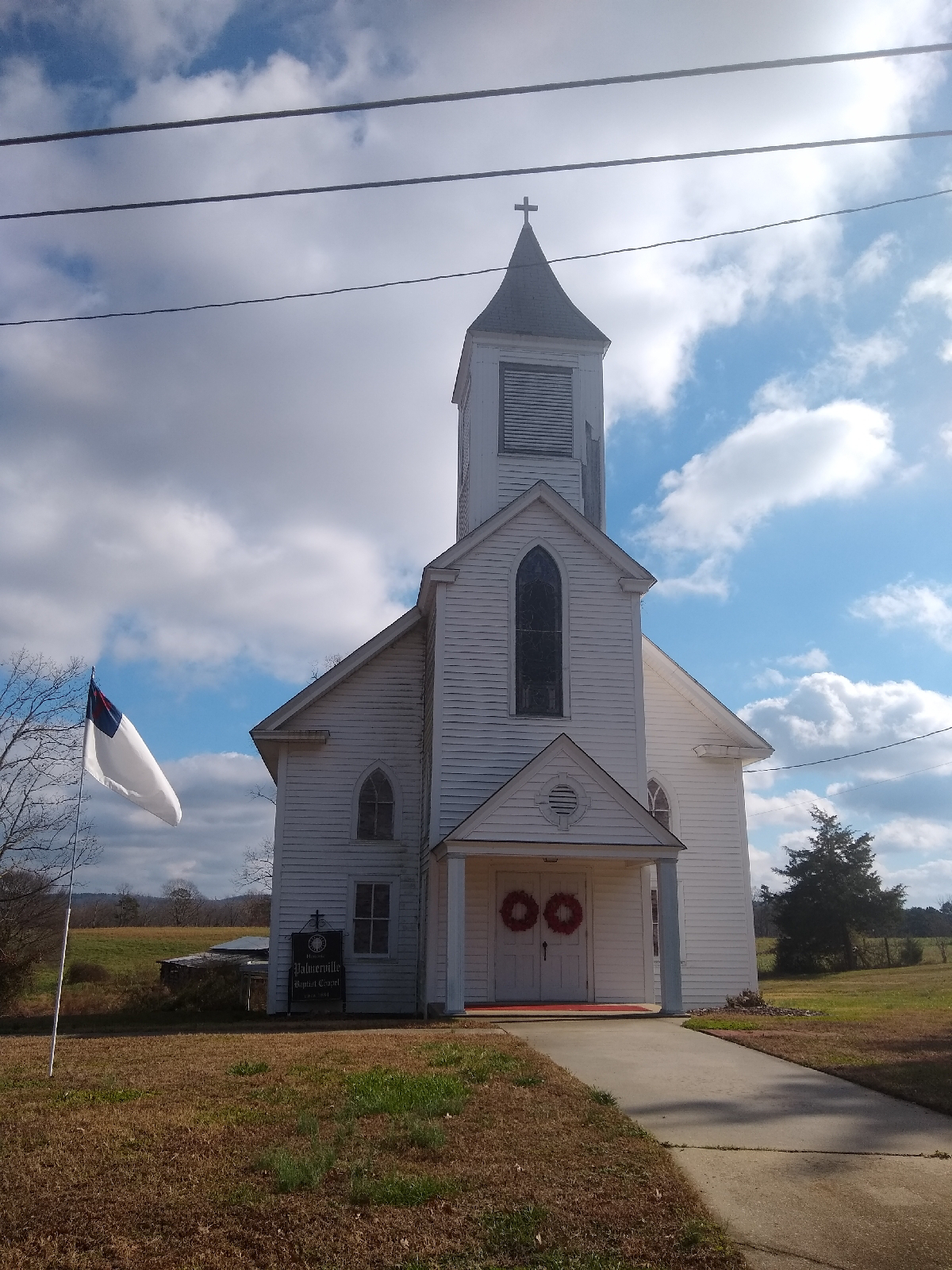 A different view of this beautiful little white church. 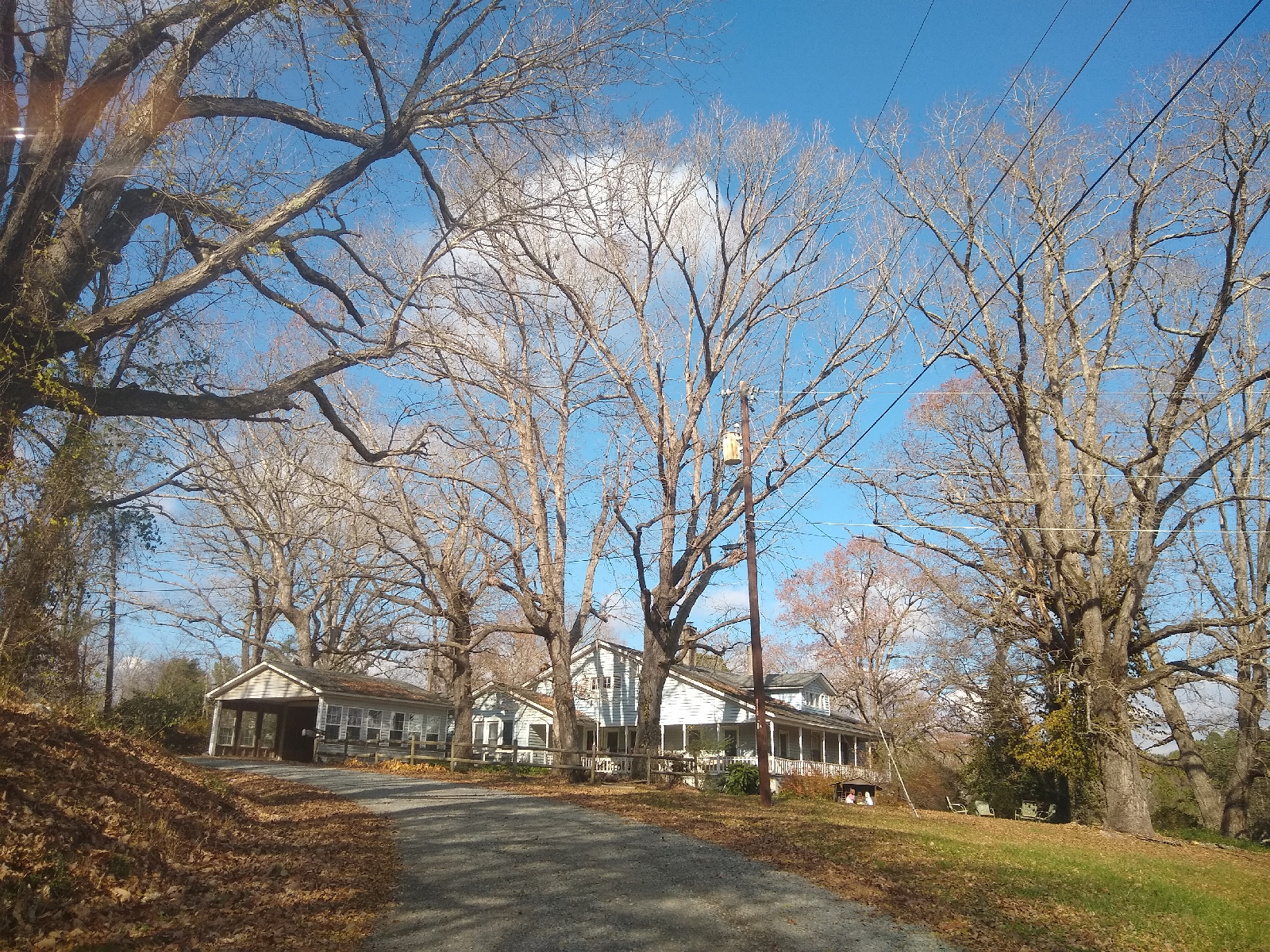 An older farmhouse that survives and still occupied in Old Palmerville. 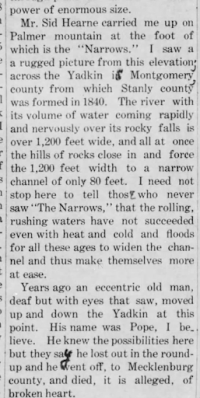 Palmer Mountain still suffers the scars of the Quarry, Gold Mine, Canal and Dam work of it's past. Owned by the family of a former NC State Senator, today it quietly overlooks Palmer Lake and the sleepy old community of Palmerville.
Posted by Jobs Children at 2:15 AM