I was first introduced to the Chapman's in the estate file of Benjamin Holmes. The one thing I knew about them was that some way, some how, they were related to him.

Benjamin Holmes had died a bachelor, and left his considerable estate to his nephew, James Lee, oldest son of his sister, Haran Holmes Lee, and her husband David. The name of Haran, or more particularly, Haran Elizabeth, was an odd one, passed down through the Holmes family, and those that married into it. There must have been a matriarchal Haran somewhere up the Holmes family tree.

A few years later, two lawsuits insued, from other persons claiming to be heirs of Benjamin Holmes. These relatives were awarded monies claimed from James Lee, the Executor. The names of these suits were "John Chapman vs James Lee"  and "George Siegler vs James Lee".

The relatives of Benjamin Holmes who recieved awards in these suits, included in his estate file were:


Two things I already knew from this list. One, that Richard H. Lee was the brother of James Lee, and thus Ben Holmes' nephew,  by virtue of his sister, Haran Holmes Lee.

The other was that Martha Proctor Roberts, Mourning Proctor Allen, John W. Henson and William D. Henson, were all children of his sister, Penelope Holmes Proctor Henson. The rest were strangers to me.

The Holmes had several dealings with the Chapman family. When brother Moses Holmes died, just one year before Ben, he had left a widow and young daughter, Mary E. Holmes. His widow, Belinda had married Jesse Holloway Lide after his death. She had began as guardian of her daughter Mary, and also as guardian of Mary's inheritance, as Mary was still a minor. 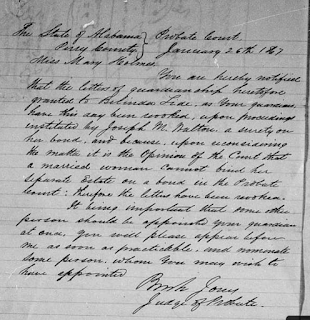 After Belinda Evans Holmes Lide was removed as guardian of her own daughter, due to the fact that she was married, one of those archaeic antebellum laws that would confound us today, a John Haywood Chapman replaced her as guardian of Mary E. Holmes. 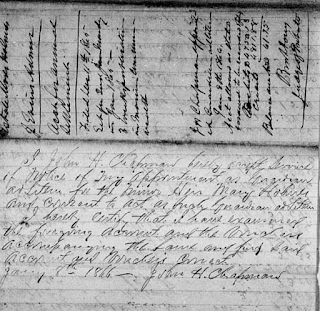 At first glance, I thought that this must have been one of the Chapmans mentioned in the Benjamin Holmes estate files. But it wasn't.  To jump ahead a minute, the John H. Chapman mentioned in the estate files of  Ben Holmes was the son a William Chapman. He was born in 1858. He would have not been old enough to serve as a Guardian of Mary E. Holmes.

Remember, Moses died in 1862 and Benjamin followed in 1863. The Civil War was raging during those years. The court systems were awry. Most of the workings of them just ... stopped.

It took until nearly the end of the decade for civilization and order to break its way back in through the chaos and disorder that the War had caused. In fact, it's not completely foreign to wonder if the deaths of the Holmes brothers may have arisen from some facet of the War.


Both armies and the Home Guard, and various gangs of deserters, from both factions,  would raid the stores and properties of private citizens. It was no secret that they would harrass, in particular, old men of position and substance and take any thing of value and confiscate animals and property "for the war effort".  Many a family had to hide their food and valueables... and their men. 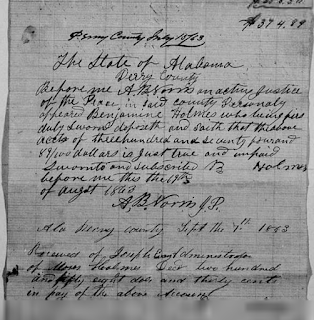 Ben Holmes even comes up in the estate papers of his brother, Moses, as he survived him by a year.


At any rate, I found the who this list of Chapmans were; James C., George, John, Martha, David and William.

They were the children of William and Esther (or Easter) Chapman, shown above in the 1850 census. These were the older children of William and Esther, James C., Martha, George, Abner, David, Haran, not Huan, that was a transcription error, Joseph and Eli. Notice some of them were not mentioned in the suit. That does not mean that all of them were deceased by then. But some were. And there is that Holmes inherited rare name again, Haran!


Ten years later, in 1860, William had passed away. This is Esther with some of her children, notice several more had been born since the 1850 census. The 22 year old "M. E. " was Martha. David and Eli were still living at home. Robert B, William H., S. E. (Susan) and John Haywood Chapman had been born. So, no, he would not become the Guardian of Mary E. Holmes, who was actually 8 years older. 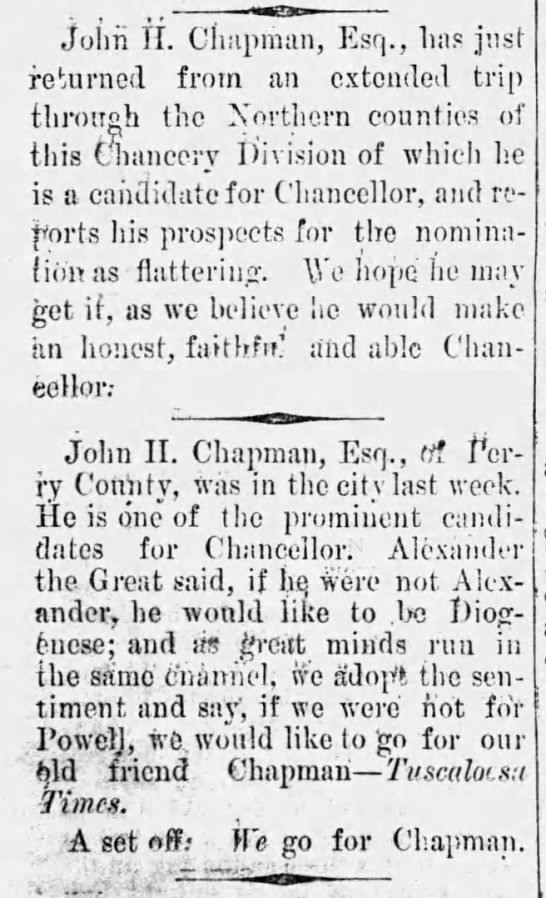 CLIPPED FROM
The Marion CommonwealthMarion, Alabama06 May 1880, Thu  •  Page 2

He even ran for State Senator in 1872. John H. Chapman had some influence and status. That does not mean that the Holmes relationship to the Chapman family was through the Chapman lines. It doesn't discount it either. 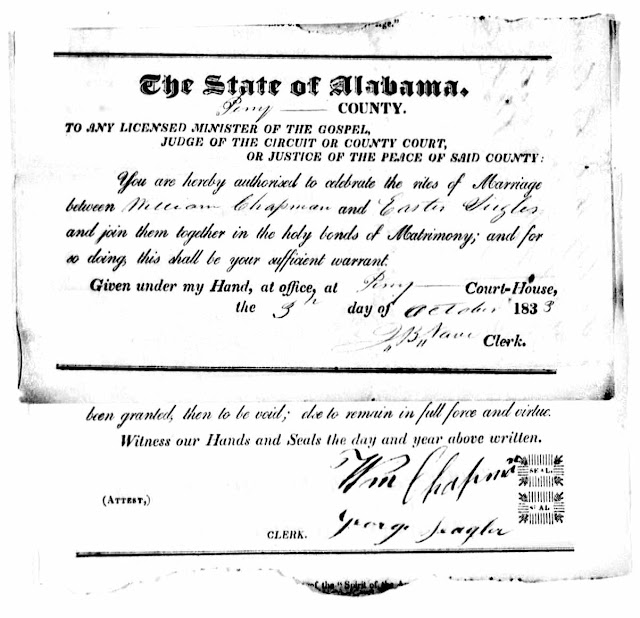 Looking closer at William Chapman and his wife, Esther, I discovered that they were married in Perry County, Alabama in 1833.  'Easter' was a Seigler or Seagler before marriage. And one George Seagler was their bondsman.

George Seigler was also mentioned in the Benjamin Holmes estate papers as an heir.

Another clue I had as to how the Chapmans may have been related to Ben Holmes was the amount of money they were awarded in the suit. $91 and 9/100. Or $91.09. Very specific amount. As opposed to say, the children of Penny Holmes Proctor Henson, whom all recieved $409.90. I'm no expert, but this tells me that the Chapmans may have been one generation down from the rest. That while these were the nieces as nephews of Ben, maybe the Chapmans were the Great-neices and nephews. This is just speculation on my part. I'm still grasping at straws here.

George Seigler, on his part, had recieved approximatley the same part as Richard H. Lee and the children of Penelope, people whom I knew were nieces and nephews. I will be back to the Chapmans in a minute, but who was George Seigler? One little side note, I have to add, that George Chapman, son of William and Esther, was fully named George Seigler Chapman, so there's that.


George Seiglers patent in Perry County is dated October 14, 1835. The same as that of Benjamin Holmes.


He first shows up in the 1840 census in Perry County. At this time he is newly married and his first daughter, Eliza Ann, has been born.

He had  married Anna Jane Jolly, daughter of Pinkney Holly and Margaret Susan Brown Holly, on May 16, 1838

In the 1850 census, he's in Perry County, but by 1857, George has moved his family to Tennesee Colony, Anderson County, Texas. In the above census record, all of the children have been born, and the oldest, Eliza Ann, is not seen because she had already married the prior year, (1859), to John C. Kendrick, but they are also living in Texas.

In March of 1861, George shows up on a Muster Roll for the " Southern Rights Guards" for Tennesee Colony, Texas. He's listed on the tax rolls there from 1857 to 1864. Somewhere between there and 1870, he passes away. His widow survives him, showing up in the census records of Anderson County through 1880. Interestingly enough, in the 1880 census, John H. Chapman, the youngest child of William Chapman and Esther Seigler Chapman is living with her and her youngest son, Edward Harper Seigler.

But he is not the only one.

In 1860, just under the listing for George Seagler and his family in Anderson County, Texas, we find these three:

They happen to be James M. Chapman, the oldest of William Chapman and Esther Seigler Chapmans family, his wife Nancy E. Woolverton Chapman, and his brother, George Seigler Chapman.

In fact, George S. Chapman takes custody of James and Nancy's surving son, Sam Dave, after the parents and brother Georgie all pass away, and settles in Colorado County, Texas, along with his brother David Chapman.


Heron Elizabeth Chapman marries Robert Jacob Allen, and at first they settle in Kaufman County, Texas, where a daughter, Helen, is buried who died at 16. Her younger brother, William Henry Chapman followed them there.


Abner Chapman, one of the middle sons, was living with James Lee in 1860, and working as a Farm Manager.

George Seigler marries in Perry County, Alabama in 1838. He had patented land there in 1835.

Esther's most of Esther's children follow George Seigler to Texas. At least 3 of them live with his family for awhile.

Esther names one of her sons, George Seigler Chapman.

I would say there is a close relationship between George and Esther. With only 3 years difference in age, my best guess would be that they were siblings.


The community in Texas where George Seagler and the Chapman children of Esther Seagler Chapman and husband, William moved to was known as "Tennesee Colony".

The Handbook of Texas decribes Tennesee Colony as a settlement formed about the time George Seagler arrived by settlers from Alabama and Tennesee, thus the name. It also names Seaglers as one of the founding families. I raced to that first census of the place, all 7 pages, hoping to find more Seaglers possibly related George and possibly giving me some answers, but all I found was George and his family, and the sons of Esther and William Chapman.


The search continues. If I had to take my best guess, I would guess that George and Esther were siblings and that their mother was a Holmes, a sister of Penny, Haran, Martha, Moses and Benjamin. If their mother was 20 years older than Esther, that would give her a birth year of 1791. Penny was born in 1793, so it was definately a possibility. As women in that time married very young at times, this possible mother may have been as young as 15 to 17 when Esther, the oldest of the two, was born. And I would bet they were born in Anson County.

Were there any Seaglers in Anson County during that time?