The Short Life of Benjamin Coley-Murray

Like their father, Edmund Murray or Coley, the children of Edmund (sometimes seen as Edward), were the "children of two names", much like their father was "The Man With Two Names". In records and paperwork, accounts and censuses, his sons especially, would vacilate between the names Coley and Murray.

Coley was the surname of Edmunds mother, and Murray was the surname of Edmunds father. The two obviously never married, and Benjamin Murray, Edmunds father, would instead marry the young Martha "Patsy" Ross and bear two "legitimate" children, Jesse and Rebecca Ann. Edmund was a good man, however, and an industrious man. He made a place and an inheritance for his family. He also openly recognized his own illegitimate children and included them in his will, which was later debated in court by his legitimate son Alexander.


Benjamin was Edmunds second son and fourth child. While the future would show that Alexander, otherwise known as "Eleck" or "A. C.", would inherit that nasty Murray "meaness" gene that seemed to infect at least one man from each generation, Benjamin seems to have inherited the "industrious" part of their father's character and none of the Murray meaness that had occupied the being of their grandfather and several cousins to come.

Caroline and Alexander are not in the family group in this one. Caroline was either married or deceased at this point, as she only appears as the oldest child in 1850. Alexander was in his own household by the time the census was taken, having married Mary Cooper, daughter of Henry and Lucinda Cooper in February of 1870. His younger sister Margaret, "Maggie", would marry Mary Cooper's brother Benjamin at some point later on. 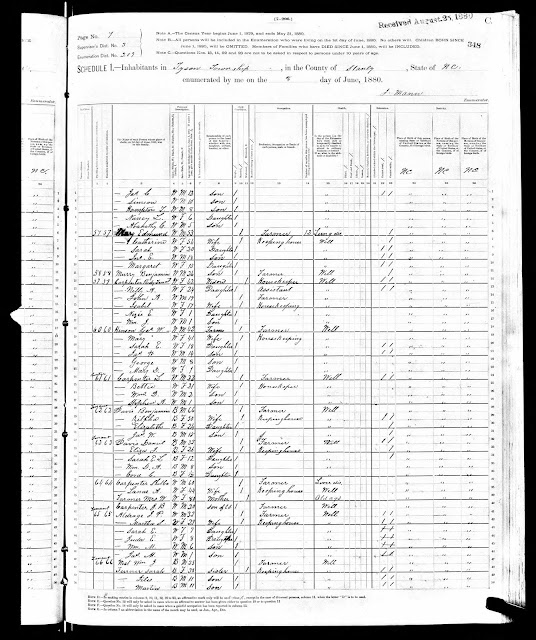 In the 1880 census, Ben is living right next to his parents. He is reported to be "Well".

A quick look at land records shows that in 1877, when he would have been about 25 years old, Ben bought a plot of land from Martin Reap (Book 11 Page 301) and in the same year, "B N Coley" mortgaged 10 acres of oats and a Sorrell Colt to Alexander Coley, his older brother.

The efforts of the enterprising young man were to no avail as his estate was probated on December 17, 1881. His father, Edmund was named Administrator. Young Ben's estate was valued at $300. His siblings, Alexander Murray, Francis Aldridge, noted as wife of W. E Aldridge, Sally Murray, John E Murray and Margaret Murray, were named as heirs to the estate, or, "entitled as heirs".

His property was described as "100 acres more or less on the headwaters of Rocky River adjacent to E. W. Davis and others". Edward Winfield Davis is a Third Great GrandUncle of mine and served as the second sheriff of Stanly County. He had property, a merchantile store, a gold mine, a church and a school down on what had been the Old Davis Plantation where his father Job Davis and lived. So the location of Ben's property is pretty discernable.

Ben's probate records are pretty thick and full of odd little receipts and claims. In some, he is named Coley, in others, Murray.

Ben owed James L Easley $1.40 for labor on a note signed by B C Blalock JP.

On the above ticket, Benjamin's name was written as Coley twice and twice striken out with 'Murry' written underneath. The community did not know how to refer to this family.

W. R. McSwain presented a claim from his account books that Ben owed him $8.27 'by Book Accounts'. William Riley McSwain was one of the more sucessfull farmers of Tyson Township. He was a Civil War Hero who had lost an arm in battle in Tennesee. As a young man, he had followed some of his McSwain relatives to Arkansas. He enlisted there and returned home to Stanly County after the War. Arkansas was a considerably conflicted and dangerous place in those days. Edmund's father, Benjamin, half-brother Jesse and his wife Mary Ann, and brother-in-law Henry Hudson, all lost their lives there in the 1860's prompting Old Ben's widow, Martha to return home to Stanly County with her widowed daughter Rebecca and her grandchildren.

W. R. McSwain served as the Postmaster of Cottonville for awhile and also ran a General  Store of sorts there.

Other debts listed in the Probate files for Ben Murray, or Coley were:

Benjamin was obviously planning a sucessful harvest. Perhaps he had begun courting a young lady in the Tyson Community and wanted to have something to impress her father with.

There were two mortgages to George D. Efird in amongst the paperwork involving Ben.

Whereas Benjamin Coley and W. H. 'Adedlge' are indebited to George D. Efird in the amount of $45 for which he holds our notes dated May 14th 1881.....convey out growing crops  of grain both wheat and corn and our cotton crops.....due in November 1881"

William Aldridge was Benjamin's brother-in-law, having married his sister, Francis.

"State of NC...
I Benjamin Coley of said County and state indebited to G. D. Efird in the amount of  Fifty-one dollars at 8 percent interest...I hereby convey to him -struck out- my new wagon and yellow mule- written over it- one sand mule and sand filly and my corn crop for 1881 with special understanding that if I should pay said amount with interest by 20th December 1881..." Dated April 6, 1881 In the Book of Mortgages Book 3 Page 467, I. W. Snuggs, Reg. of Deeds.

Ben was a young man. There were any number of maladies going around he could have been besought with.

The 1880 Stanly County Mortality Schedule for June 1, 1879 to May 31, 1880 listed deaths in Tyson Community. There were two physicians listed that served the people of Tyson: Dr. M. T. Waddell and Dr. William Kendall. Several children had died of Whooping Cough or Cholera. Two young men, George Sides, 20, and George Poplin, 15, had died of Thyphoid Fever. Several children died of diptheria.

Ben could have been striken with thyphoid, pnuemonia or influenza. He lived near the river, where mosquitos were known to be a hinderence. But his purchases told the story of a man meaning to build something. He was in it for the long haul. He didn't leave a will. I believe his death was more than likely from something sudden, possibly an accident.

It is obvious to me, in any circumstance, that Benjamin Murray was not planning to die anytime soon.

His property sold on December 2, 1882. Purchasers were A. C. Murray, William Reap and Edmund Murray.

Personal Property was auctioned off about the same time. A. C. Coley (brother) bought a blind horse. Another blind horse and a bay horse were sold. I wonder if they did not mean "horse blinders" for the first two, as the bay sold for $52 and the "blind horse's" for much less.

Of all the sorrows that Edmund had in life, having to bury his promising young farmer of a son had to be one of the worse. Oldest son Alexander would pass the Coley name on to his descendants, live a long life, and become known for his ruthlessness. Youngest son John would become known as more of a tender soul, and easy-going person. There is one instance of Alexander insulting his intellegence, because John Coley-Murray had no issue with their half-brother, John A. Carpenter, sharing in their inheritance from their father's estate. John would come to a tragic end.

But that is another tale in the story of the Murray family.

Posted by Jobs Children at 1:50 AM