My newest undertaking (as if I needed another one) takes me into uncharted territory. Instead of attempting to research a known ancestor, I'm taking a possible ancestor, and attempting to determine if ,and how, I ended up with this persons dna. 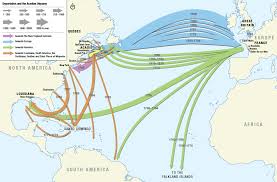 The whole process began this way: I was contacted by the son of a dna match of mine. I will call him Sherman. This person is a 5th to 8th cousin of mine. Very distant. The family and the shared matches all seem to be Acadians, or link back to French Canadian ancestry. I have none that I know of. But perhaps this was not the link.

With this match that we were trying to discover the link, I have 8 shared matches that I can make heads or tails of, all 4th cousins.  I did not see any names that would link them to my own family tree, at all.

What I did see was a common thread between them: Adams.

The most ancient of these ancestors was Thomas Adams, born about 1735 in England and who died around 1820 in Anson County, NC. There you go! I once heard an old Realty motto was "Location, Location, Location". In genealogical terms, this applies to having descended from the people who made it to this area of North Carolina, and stayed, while siblings moved westward. If a distant cousin has roots back to this area, that is where we need to look.

Apparently, Thomas Adams had a descendant named Laura Adams, born around 1878 in Louisiana. She married to a man named Octave Deslatte. There is where the Acadian roots come in. No, I don't have to have Acadian roots to be distantly related to this group of Acadian descendants, not when they also have English roots back to Anson County.

There was a significant presence of Adams in early Anson. Thus begins a discovery of research from Laura Adams Deslatte up and Thomas Adams Sr. down to see where they meet, and then possibly, and probably, where I fit in.


There has been a great deal of research done on the Adams family of this area. Maybe a good look through will offer up a clue of where my own ancestry could fit in, probably down a maternal line.

Genealogy of an Adams Family


Below is the will of one Richard Adams of Anson and Richmond Counties, NC, as transcribed by Catherine McNeill.


Will of Richard Adams
Transcribed from copy of original by Catherine McNeill
June 08, 2004