Recently, I recieved a treasure in the mail: Another assortment of CD's with old records of Stanly County. The first one I chose to peruse are the records from the Stanly County Clerk of Superior Court, 1877 - 1887. This era was a time of recovery for Stanly County, the devastation of the Civil War was a decade behind. New industry was developing and more train tracks were being built. Along with the many cases of debt, land disputes and drunken brawls leading to charges of "affray", there were several cases of genealogical interest to Stanly County citizens, divorces, bastardy bonds that named the fathers of mystery children, cases of affairs. And then there are the murder cases. 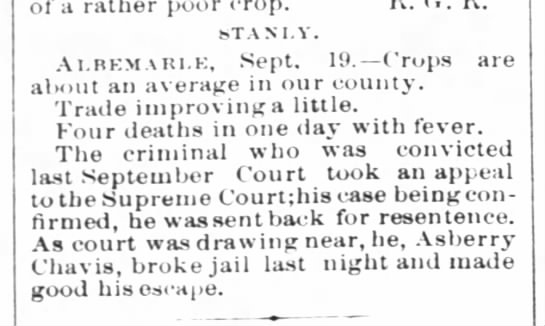 The docket of 1879 lists the case of one Asbury Chavis. It reads" Asberry Chavis to be taken to the jail of Stanly County where he  will remain until the 30th day of April 1878 and on that day he will be taken by the sheriff of said county to the place of execution of said County between the hours of 10 am and 2 pm and there hang by the neck until death." 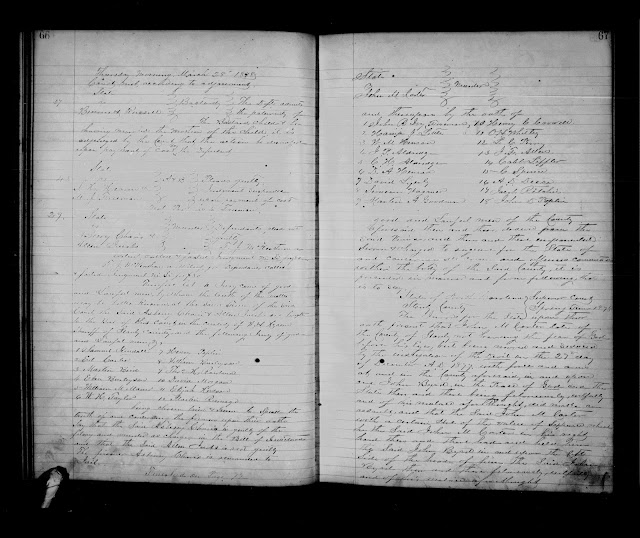 But no one has ever mentioned anyone by the name of Asbury Chavis being hanged in Stanly County, so I looked to see who he was.


Asbury Chavis was from Richmond County, NC and obviously did not take kindly to being locked away.

Asberry Chavis had been jailed in Richmond County until he and his brother attempted an escape and attacked the jailer, which had caused the death of his brother and injury to Asberry.

But to the beginning, who was Asberry or Asbury Chavis?

Asberry first shows up in the census in 1860 as a child, living in the home of one Asa Jacobs, with his mother, Adeline, brothers James and William and sister Elizabeth. Asa Jacobs turns out to be his grandfather.

Adeline and her father, Asa were originally from Brunswick County. They were part of the group of "Croatans" who would come from eastern counties to work in the turpentine industry in Richmond County. The 19th century Croatans would become the racially intermingled Native American tribes or combination of residual tribes that we know today as either Lumbee or Haliwa-Saponi, depending on the location. In the 18th and 19th centuries, they appeared to be rather nomadic, drifting from spot to spot, seemingly belonging no where, and doing the best they could. They freely intermarried with both white and black neighbors and so many of their roots were lost into both communities.


The census takers were never sure what to do with this group of people. They were sometimes listed as white or black, often members of the same family in the same census, or the same individual in various censuses, depending on their complexion. But most often, they were labeled as "Mulatto", which seems to have meant for these census takers, "Somewhere in between black or white, either both or neither".


In 1870, a teen-aged Asbury Chavis is found still living in the Wolf Pit Community, with his brother Edward J. , in the home of his grandmother Elizabeth. I wonder about the size of the home to hold 12 to 16 people. The immediate neighbors included a large number of other Chavis and Jacobs, along with Locklear, Lowery, Oxendine, and other typically Lumbee surnames.

In the annuls of the Supreme Court of North Carolina is a case study on the events that led to the arrest and conviction of Asbury Chavis and the decision that followed.

From the court documents and recorded accounts of the murder, this seems to be a summary of what occurred on that day. Asbury Chavis, along with his brother James, and Allen Jacobs, who may have been a cousin, or other kinsman, were drunk and disorderly, having a grand old time carousing and using foul language around the town of Rockingham, in Richmond County, North Carolina. 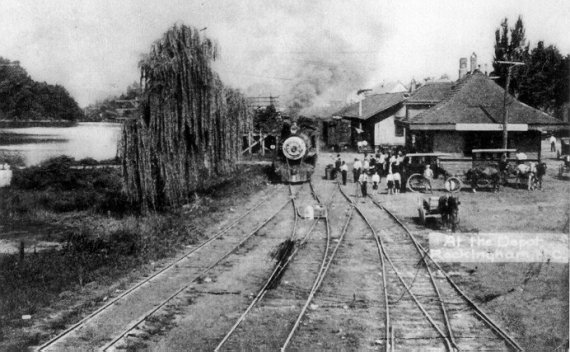 They began walking down the railroad tracks, where they came upon a man named Jere Everett.

Jeremiah Everette was a few years older than this group, and African-American. As he and his family were not in any earlier census records, he was probably a freedman.

He is shown in the 1870 census with his mother and his young son.

Jeremiah Everette met the 3 young men along the road, where he was traveling toward Rockingham with a bundle on his head. Witnesses saw them meet and talking, but no one was close enough to hear the conversation. The conversation became heated and Everette was thrown to the ground. When Everette got up, he struck at the 3 with a fence rail. He may have hit one of them, he may not. One of the three took a fence rail, knocked him down with it and Asberry Chavis was seen stabbing at him, as with a knife. The victim got up and Asberry Chavis appeared to stab at him again. Jere Everette was heard to say "Let me alone" and ran.

He made it about 130 yards before the three younger men overcame him and took him down and attacked him, and he was not to get up again. Allen Jacobs said "Come on, someone is coming" and Asberry Chavis raked his knife along a fence and stated that he would kill any "damned man" that came there.


One witness was a woman named Laura Leak, and she went over a fence and into a cornfield to hide from them.

The state debated on several points, involving the point of only one true witness, Laura Leak, the fact that the men pleaded not guilty, whether or not the victim was pushed down in "a mere drunken frolic or sport, not intending to harm them" and whether his angered assault with the rail would lead to a charge of manslaughter instead of murder.

In the end, Allen Jacobs was deemed "Not Guilty' and Asberry Chavis was guilty of murder, and sentenced to be hanged.


We are constrained to hold that the facts of this case bring it within the second exception: The prisoner and his comrades were going from the town of Rockingham, intoxicated, cursing and using vulgar language. They met the deceased quietly coming along the public road. They all three laid hold on him and threw him to the ground. He rose and struck at them with a rail, as he had the right to do, considering the overwhelming force opposed to him. But it does not appear that a blow was given. There is no proof that there were any bruises or marks of violence on the person of either of them, — and a blow with such an instrument would be apt to leave its mark. The deceased was then knocked down with a rail, and while on the ground, the prisoner struck at him as though with a knife. He rose up, and the prisoner struck at him again as if he had a knife. The deceased then said "let me alone" and ran. The prisoner and James Chavis pursued him one hundred and thirty yards, overtook him and were seen to have him down in the road, and no doubt it was there he received the last fatal stabs, for he never rose again; and in a few moments afterwards he was found lying there badly stabbed in several places, and in a dying condition. A man endued with the ordinary feelings of humanity, no matter how high his passions may have been excited, upon seeing his victim wilting in blood and struggling in the throes of death, would evince some relenting symptoms, but not so with the prisoner. He manifested no compunction for his bloody deed, and when called by Jacobs to "come on, somebody was coming," he ripped with his knife against the fence and said "he would kill any damned man that came there."
We think the cruel, brutal, and excessive violence used by the prisoner was out of all proportion to the provocation given by the assault with the rail under the circumstances. To use the language of Chief Justice NASH in the opinion delivered by him in State v. Howell, 9 Ire., 485, "this case is relieved from all doubt and uncertainty. The facts are few and simple, furnishing a full and complete instance in themselves of that malice which is essential to constitute a case of murder; of that mala mens, a mind regardless of the obligations of social duty, and fatally bent on mischief." We have carefully examined the record and find no error. Let this be certified, c.
PER CURIAM. No error.
Sentenced to be hanged. In Stanly County, North Carolina, no less. Yet, he was not. 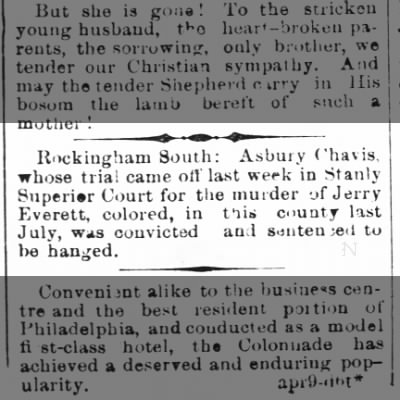 
The case was tried and retried a munber of times. 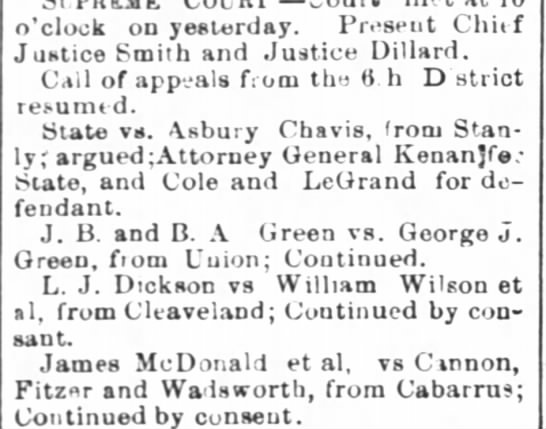 
Asbury Chavis used all of his appeals, claiming innocence at each turn. 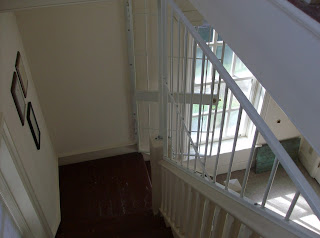 So how did Asberry Chavis escape the noose? He escaped..... 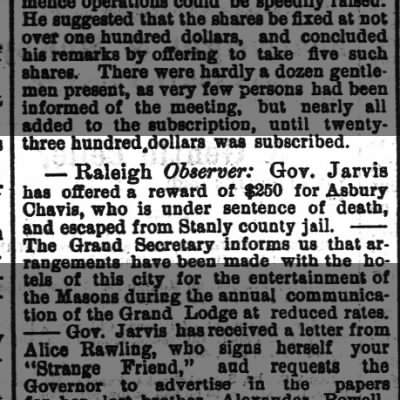 The first escape ever made from that jail! 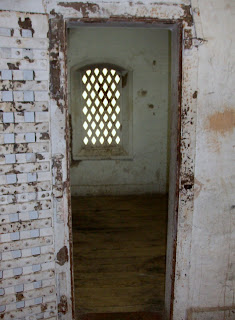 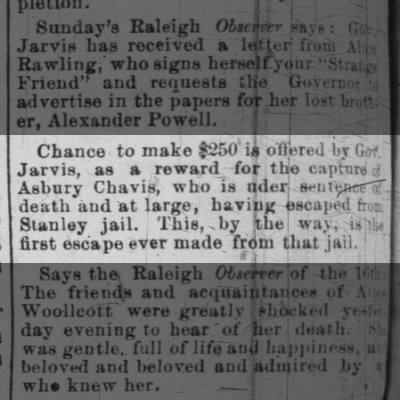 
So where did Asbury Chavis run to and did he hide? The answer is, not very far and not very well. He went to Wake County, taking his young wife Jenny Jacobs Chavis with him, and boarded with his uncle.

The ages for he and Jenny are about a decade off, but the individuals, Uncle John and Grandmother Charity, are correct. 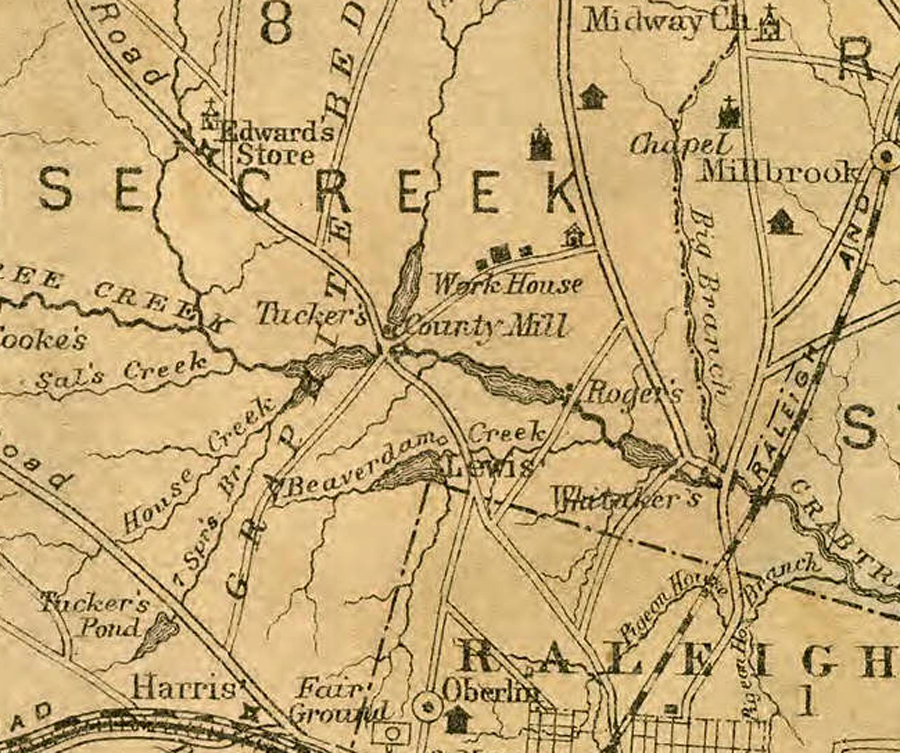 Shortly after, he would end up in Marlboro County, South Carolina, just a county south of where he grew up, probably in the Chavis community named for his large and varied family. 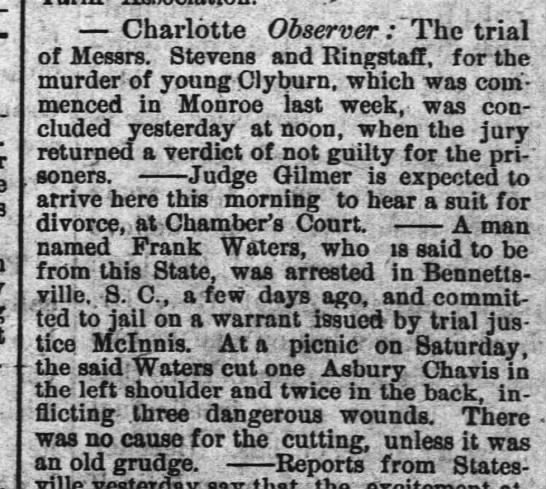 In 1883, Asbury Chavis was himself cut 'dangerously' at a picnic and just 4 years later, in 1887 was in jail in Brunswick County, North Carolina, where his mother's family was originally from, again for murder. 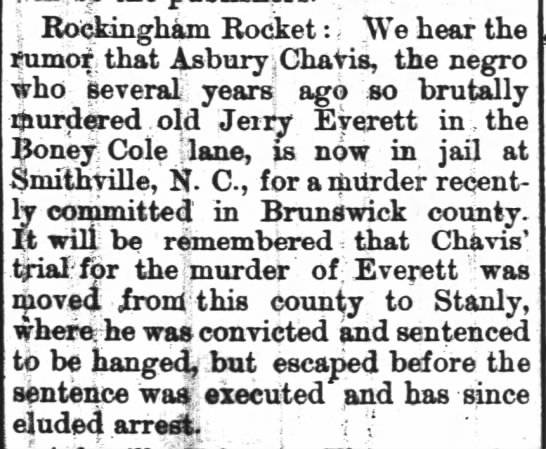 His 1887 rampage did not only include the murder on the coast, near Wilmington, but back in his old Richmond County, NC and Marlboro County, SC stomping grounds. 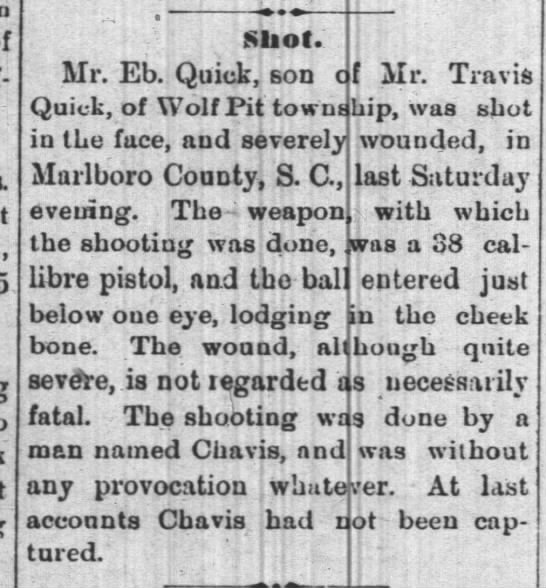 
So, was Asberry Chavis ever hanged? Did he ever pay for his crimes?

The answer seems to be "No".


In 1900, Asberry and his wife Jenny are found happily living right smack in the sore spot of Richmond County, North Carolina, with their large family of children. It appears Asberry Chavis was forgot or forgiven and found innocent in Smithfield.

A decade later, they have slid down into Marlboro County, SC and continued to enlarge their family.

By 1920, Jenny appears to have gotten tired of Asberry's violent and troubled behavior and in the 1920 census, he is divorced.

On June 7, 1920, Jenny Jacobs Chavis remarried to William M. Fields and is found with two of her children with her new husband in Sanford, Lee County. Pearlie and Garfield Chavis are mistakenly labeled "Fields".

1920 was the last census of  Asberry Chavis. He lived a long and troubled life, but left bountiful descendants.


He died about 1925 in Marlboro County, South Carolina.
The children of he and wife Jenny were:

Their stories are entirely different ones indeed.  The family did not reflect the history left to them by their father. They remained a bit nomadic, centering in and moving in and out of Richmond County, North Carolina, Smithville, Marlboro County, SC; Robeson, Lee, Alamance, Moore and Scotland Counties in North Carolina.

As for Asberry Chavis, he escaped the noose and "hid" in the open, starting and raising a family within an arm's reach of his old stomping grounds, continually in and out of trouble, and escaping judgement, except by God, with each turn.

There are no signs he ever returned to Stanly County, however, where he escaped from jail and the noose awaited him.

Posted by Jobs Children at 4:34 AM