The End of TF Davis

T. F. Davis was a middle child, born fifth in line in the march of children. He first appears in the 1870 census, when the family was still living in Tyson Township, Stanly County, North Carolina.

The neighbors surrounding the family at this time included Lee's, Crumps, Mortons, Easley's, Shankles, Carpenters and Aldridge's; names reminiscent of the Tyson and Cottonville area.

Thomas was likely born within a year after his father's return from the Civil War. The area was devastated and his Grandfather, Henry Davis, had passed away just before his birth.


Thomas and Susan would marry in 1886 and were living together in 1900 in the Mark's Creek area of Richmond County. After the death of his father, Benjamin Franklin Davis, his mother, sisters and single brother Hartwell Alexander Davis, had moved back to Stanly County. Hartwell died in 1902 and brothers, Holm, Math and John S. Davis had remained in Richmond County and raised their families there, along with Thomas F. Davis.


Thomas F. Davis and wife Susan Peele Davis would have 6 children, 5 daughters and one son.


It appears that Tom had the sad inheritance of his grandfather Henry Davis's curse of alchoholism. The 1900 census is the only one that he and his wife and children would appear in. Below is the Stanly County account of what happened.

By 1880, older brothers Holm and Matt had struck out on their own and the family had moved to Richmond County. It is unknown what countered the move. The size of the family had increased and two sisters, Nannie and Lilly Mae had yet to make an appearance.


This is the Richmond County account of what occured. 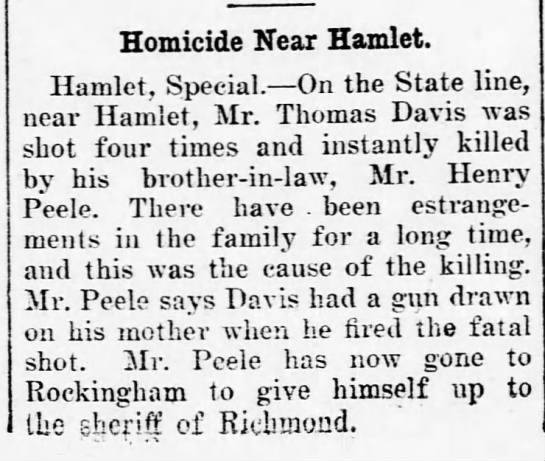 
Henry Robert Peele was the youngest son of Fletcher and Nannie Peele. In 1910, four years after the shooting and death of Thomas F. Davis, he was single and living at home with his parents. He would later marry Mattie Smith and have his own family, passing away in 1941 of throat cancer at the age of 61. So, what was the final verdict in the case of the death of T. F. Davis?

During his WWI draft registration,in 1917-1918 he is described as being of medium height and build and having blue eyes and gray hair at the age of 39. He aged very rapidly.

But it appears H. R. Peele was never charged or tried for a crime in the death of T. F. Davis. It seemed a matter of self-defense and defense of his mother Nannie. Sadly, T. F. Davis had brought his ending upon himself and it was not a good one.

Henry R. Peele continued to live a good life, it appears, even serving in the local government in small offices and 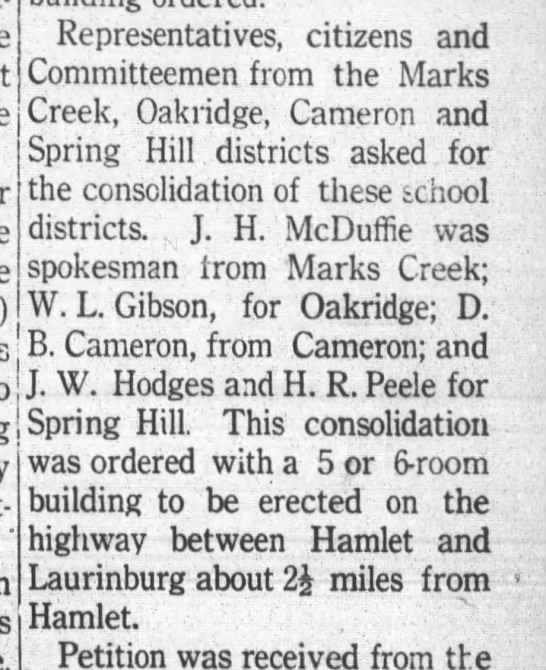 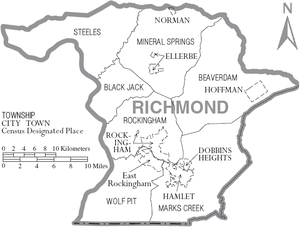 After the death of her husband, Susan moved the family from Mark's  Creek, Richmond County to Blue Springs in Robeson County, which later became part of the new county of Hoke, in 1911. 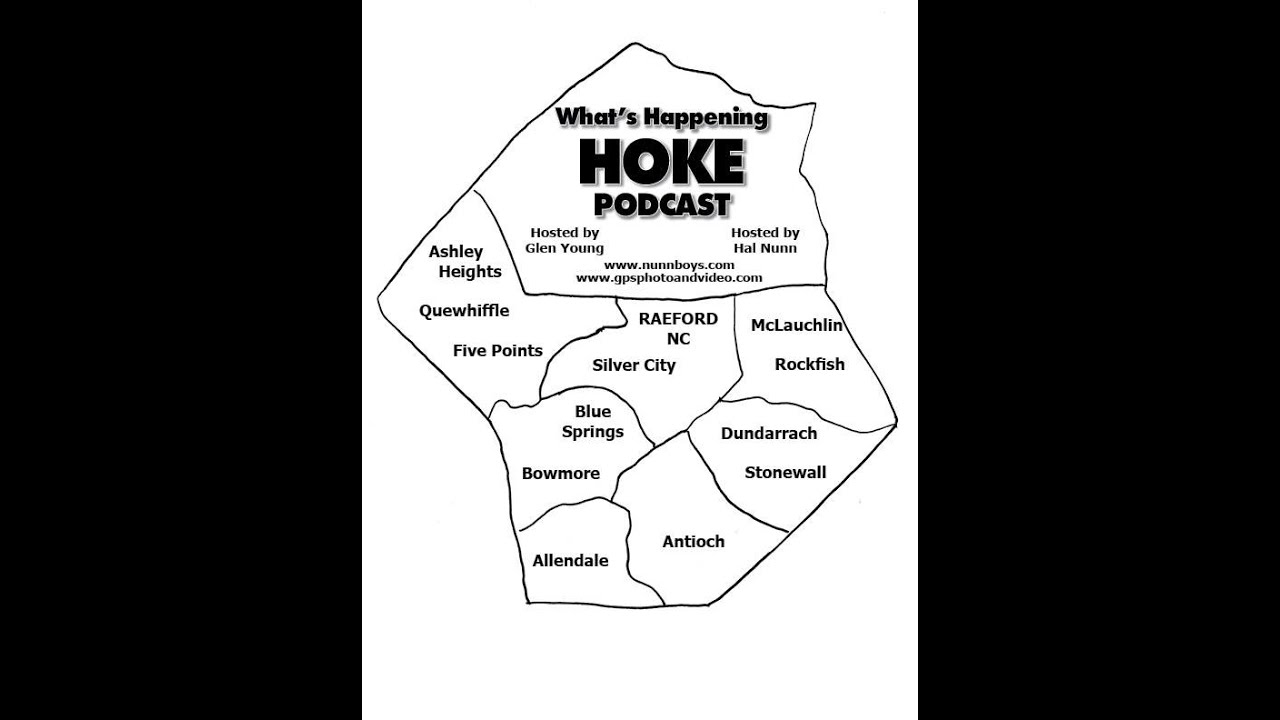 Blue Springs is south of the town and Raeford, North Carolina where Native Americans outnumber Caucasians, making up 25% of the population, while African Americans are the majority at 40% Susan Peele Davis passed away on January 15, 1946 and is buried at Tabernacle Cemetery in Scotland County, North Carolina.

The Children of Tom and Susan Davis were:

5) Pearl Davis - born September 11, 1897. Married 1st) Archie R. Livingston. Three children;
Mary Elizabeth Livingston (1927-1937), Archie Clyde Livingston (1930-1997) and Edna Pearl Livingston Davis (1932 - 2015).  With Mary Elizabeth passing away as a child and Archie Clyde having never married, all of Pearls grandchilden came from Edna. With Flossie Mae having also married a Livingston, and with Edna having married a Davis, I had to look into those two families to see if they were connected.

And they certainly were. Archibald R. Livingston and Belton John Livingston were brothers, sons of John and Mary Smith Livingston.


As for the Davis that Edna married, he was a cousin.

Willie Nelson Davis was born May 13, 1926 in Scotland County, North Carolina. He and Edna Livingston Davis would have 5 children between 1951 and 1960.


Below is the family tree between Willie Nelson Davis and Edna Pearl Livingston Davis.


The Livingston, Davis and Peele families were so intertwined, it's difficult to decipher the relationships.

And to the last, youngest and only son of Thomas Franklin Davis and wife, Susanna Peele.

Thomas Franklin Davis, Sr. lived a short and wreckless life, but was survived by 6 children and many grandchildren and great-grandchildren. He was Great Grandson of Job Davis and a branch of the Davis family tree.