When it comes to researching the Simpson family of the boiling, bubbling brew that was early Tyson Township in Southern Stanly County, North Carolina, one does not encounter a family tree, but instead, a tangled, twisted, mottled jungle of kudzu.

A few members of the Simpson family married into the Aldridge family. One, a grand, Good Christian man if ever there was one, Green Wesley Simpson, married Margaret Jane Ross/Aldridge. The adopted daughter of Caleb Aldridge and adopted sister of Henry Garner Aldridge and Josiah Aldridge, my ancestors.

Jesse Filmore Aldridge, the oldest son of my Great-great Grandmother, Julina Aldridge Davis and half-brother to my beloved Papa Will Davis, married Daisy Simpson, the meek, teenaged daughter of a woman who has turned out to be the notorious Laura Simpson. 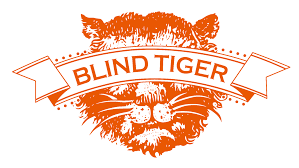 This post will examine the career of Laura Jane Simpson, and is told mainly in the newspapers. Laura herself was born an illegitimate child, the oldest of four, to Nancy Ann Simpson, who also had two sisters, Delilah and Judith, who also bore illegitimate children. So, it was not an uncommon thing in the family.
Laura had 4 children by 4 different men in different stages of her life. She seemed to have been known head on as a woman of ill repute, and as she got older, she brought others into the fold, so became a menace to the community.
Laura lived between Rocky River Springs and Cottonville in Stanly County, North Carolina. 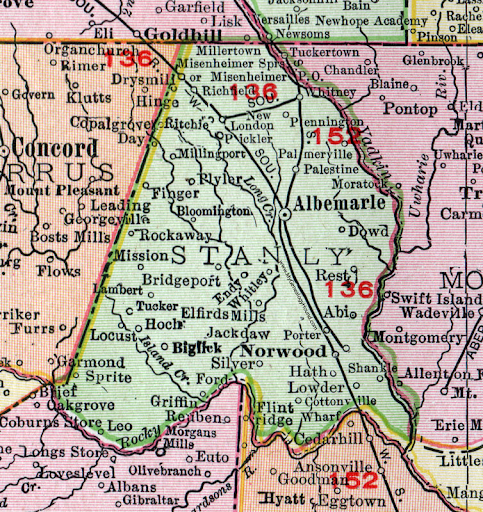 Cottonville, in its heyday, was known for none than - Cotton. Reported by the New York Newspapers to have the best grade of cotton on the eastern seaboard, in the 1820's and 1830's, Cottonville was larger than Charlotte. Now, you can drive right through it and never know you were there.

Rocky River Springs, during the time Laura Simpson lived, was a resort.  In the Victorian trend of  "healthy mineral springs", people went there for rest and restoration. It had a find hotel and lots sold along named streets for vacation homes. Although the town no longer exists, and was replaced by Aquadale, just north of it, in Laura's time, she was not in the 'middle of nowhere'. Her home and her business, was located between two closely located, bustling centers of wealth and activity.
Laura ran what the papers called a "Bawdy House".  The Merriam-Webster Dictionary defines a Bawdy House as a brother, an establishment of ill-repute, kept for the resort and unlawful commerce of lewd people...
In other terms, Laura was a madam. She ran a place where people could go to drink, carouse, gamble, dance, and acquire the company of easy women and have a great deal of illegal fun. Several of the other "Bad Girls of Stanly County", that were popping up in the court records at the same time for the same 'nefarious' reasons most likely worked for Laura. There were a group of Hinson sisters and a neice, a Cranford lady, several Springers, and Laura's own younger cousin, Tirzah Simpson, whom I have posted on recently, and her own eldest daughter, Mamie. However, after Mamie, it appears that Laura and Tirzah especially, went to great measures, with the help of their supplier of illicit spirits and one of Laura's lovers in her younger days, W. R.  Krider of Rowan County, to her their girls out of Stanly County, and get them married respectifully, before the same fate befell them. 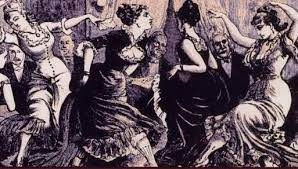 By 1900, Laura was 43, and the community had grown quite tired of the trouble she attracted, like bees to a flower bush. She began being arrested and prosecuted by 1904. Her last child had been born in 1890 and Tirzy's last child was born in 1900.

In the beginning, Laura was avoiding prosecution. 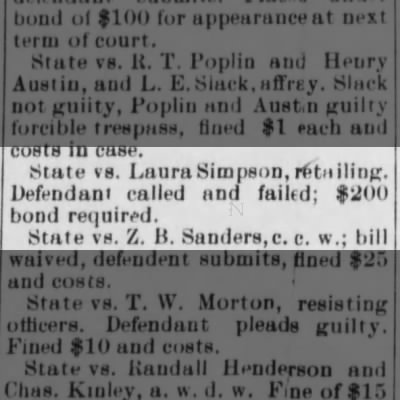 When arrested or approached by law enforcement, Laura would feign ill-health. Her lifestyle had rendered her possibly more feeble and fragile than pious women her age, giving her the appearance of someone 20 years older than she actually was, so when they are referring to her as an unhealthy old woman, and describe someone who was 70 or 80 years old, she was actually only in her 40's or early 50's. It reminds me of someone who has undergone a lifetime of alchohol and drug abuse today. They rarely live to see 50, and if they do, their bodies are besought by a plethora of health problems, akin to someone 20 or 30 years their elders.


The courts had sent local doctors, Richard Anderson and Dr. Hill, to examine Laura and determine if she were healthy enough to survive the trip from Cottonville to Albemarle, about 12 miles, and also fit enough for the rigors of jail and mental anguish of trial. 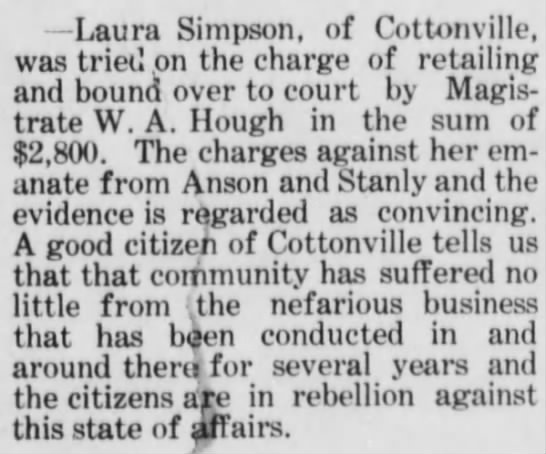 
The "Good Citizens" of Cottonville had finally managed to have Laura Simpson convicted and tried, in attempt to shut down her illicit business. I am sure most of those good citizens were the wives of men who turned their attention to Laura's place on the weekends and neglected their wives and children and farms. The papers told that she serviced both citizens of Stanly and Anson County, both sides of the Rocky River.

25 January 1906 • Page 2
The Enterprise
In 1906, Laura was sentenced to 5 months in the County Jail. She refused to rat on her suppliers, and begged mercy from the court, instead, because of her ill health. Her pleas fell on deaf ears, as the judge determined she could be treated by local doctors while in the jail, easier than releasing her back home, to continue her illegal adventures. Her appearance caused a 'lively rustle' in the courtroom. I'm sure there was an abundance of 'good wives' there who wanted a look at a fallen woman, and just who their husbands were handing their money to. They were probably not expecting a broken woman as I imagine Laura to have been. 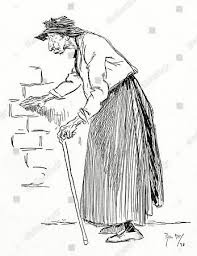 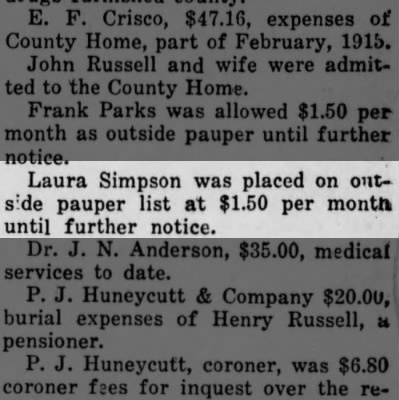 In 1910, Laura, now 53 years of age, was given 12 months in jail for 'retailing', which was actually the sale of illegal 'spririts'. According to the court docket, she was not the only person in Stanly County who had resorted to that lucrative business. 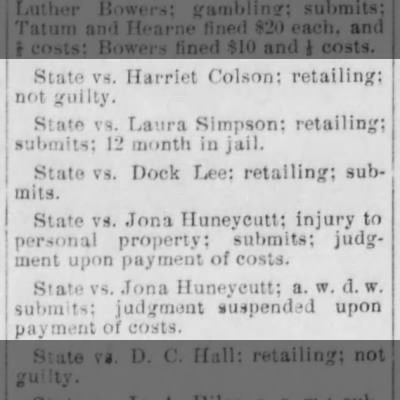 Interested parties sought with the governor of the Great State of North Carolina for a pardon for Laura. She either had friends in high places (or low places with lots of money), and possibly had 'taken the fall', for a mover and shaker of ole' Tyson, StanCo.


Earlier, in 1905, Laura was causing a considerable cost to the county for doctor's visits as she was on the county dole and considered insolvent. 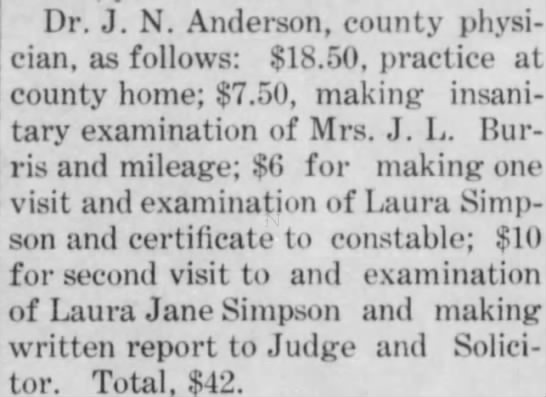 The Enterprise
10 August 1905 • Page 4
In the 1900 census, Odum Asberry "Bud" Simpson, aka Bud Krider, was found living in the home of William R. Krider, a wealthy Rowan County gentleman farmer and businessman. Krider had friends and relatives, not only in the Rowan County government, but also on the state level. He operated legitmate businesses, but made more money dealing with illicit business activity. Also living with the Krider family was his older sister,  Mamie and Rosa Belle, the oldest daughter of Laura's younger cousin, Tirzah "Tirzy" Simpson.
Krider was not only the supplier of alchohol to Laura's 'bawdy house', but the father of her only son, Bud. The Simpson children were listed as 'servants' in the Krider home in Provindence Township.
Laura Simpson was arrested, again, in 1910. The following article from The Enterprise, out of Albemarle, gives a thorough account of what had been taking place. 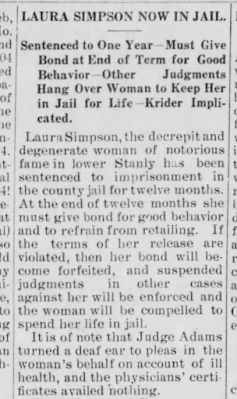 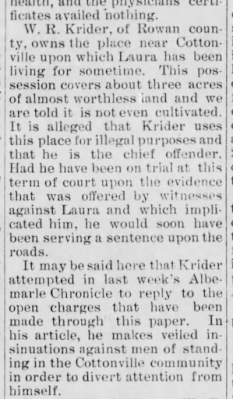 And indeed, Laura is seen as an inmate in the Stanly County Jail in the 1910 census. The jail was apparently part of the home of Sheriff Silas Green, or otherwise, the County Jail provide the Sheriff and his family a home at the jail. Of note, Laura was the only female and the only person not of color in the jail.

Laura was not in jail long, when she escaped, which leads to the question of how? Certainly she had help, did someone break her out, or did dirty money in the hands of the proper greedy jailor lead to her freedom? 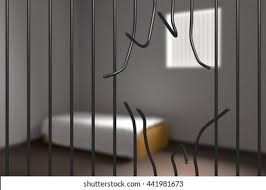 Laura Simpson was just a small part in the larger machinery of the illicit alcohol business of Anson and Stanly Counties. A frustrated and obliterated generation had resorted to centuries old methods to drown their sorrows and entertain their weary souls. The faithful and pious was in a centuries old fight to deny them this destructive luxury in which to drown their problems. \

16 November 1910 • Page 7
The Evening Chronicle
Charlotte, North Carolina
Bud Krider or Crider, mentioned in the above article was none other than Odum Asberry Simpson aka Bud Krider, Laura's son. He had grown up to be a whiskey runner for his father, and appears to have started at a very young age. 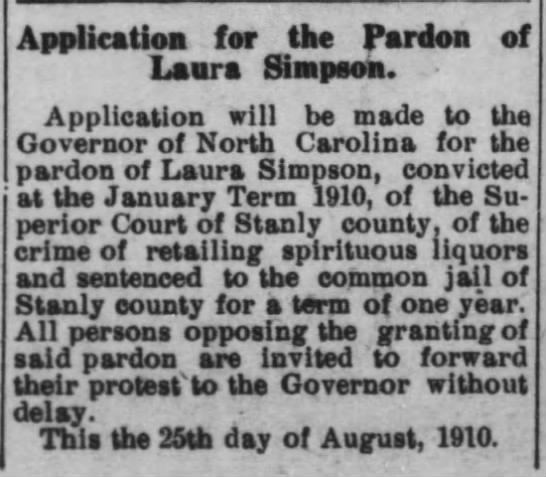 Led by Krider, an appeal was made to the governor for Laura's release, due to her health and feebleness. 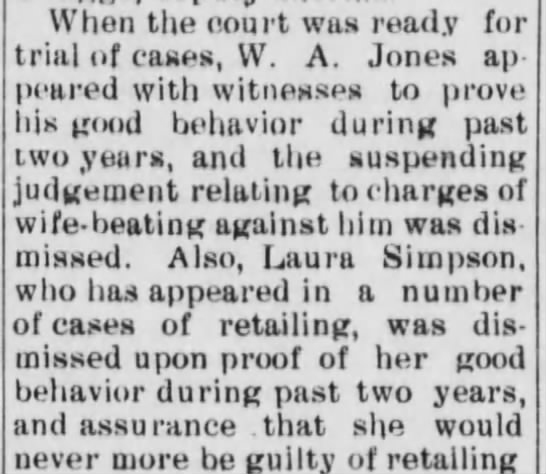 In 1911, Laura's case dismissed upon good behavior and she was freed to return home on the promise to sin no more. Afterwards, she simply had to survive on the public dole, or keep any other form of money making under complete wraps. No more wild parties at the Simpson place. The County was now her 'supplier'. 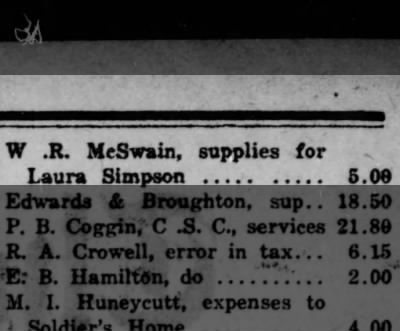 By 1915, W. R. McSwain was taking care of the aging Laura Simpson, making sure she had necessities and sundries. Shown in the same issue of the paper, she was recieving county support. A few dollars in those days were like a welfare check of a few hundred would be today. 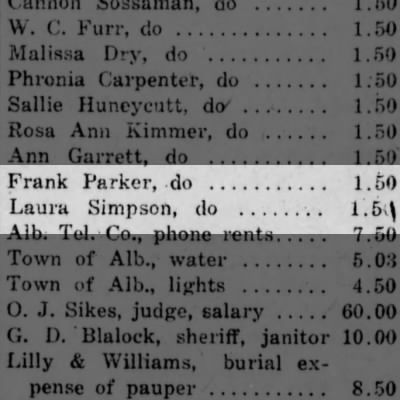 In 1916 and 1917, as reported in The Enterprise, Stanly County newspaper, Laura Simpson was still recieving county support. 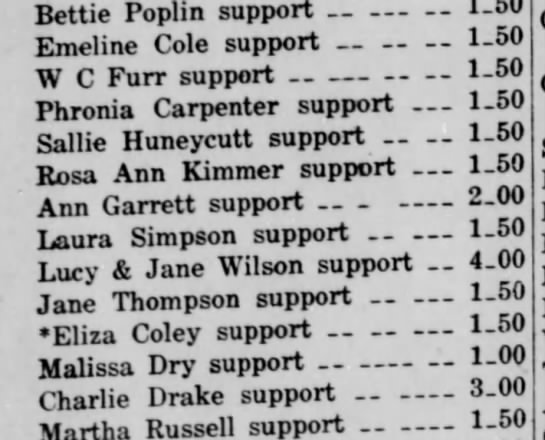 Laura Jane Simpson died on October 15, 1917. She was 60 years old. Her cause of death was Cardiac Insufficiency, or chronic heart failure. The informant was George W. Stinson, a Norwood merchant, who ran a furniture store. Furniture stores also sold coffins in those days, so George W. Stinson was also the undertaker. Her mother was given, correctly, as Nancy Simpson and she was buried at Rehobeth Church below Aquadale, which was in part founded by her Uncle, G. W. Simpson. 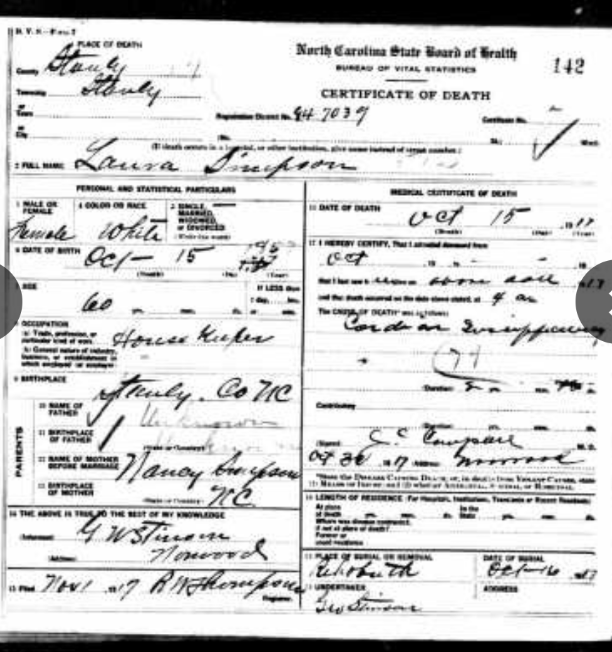 Laura left 4 children whose lives I will cover next and were just as affected by her own as she was by her precedessors. Laura was not only part of everything mentioned in the above articles, she was also one of those women who didn't exist, but did.
Her tombstone stated simply,  "At Rest."

Posted by Jobs Children at 4:16 AM